Milena Tscharntke in The New End

In German director Leonel Dietsche’s post-apocalyptic feature debut, The New End [+see also:
trailer
film profile], screened as a world premiere in the New German Cinema section of the Munich Film Festival, all women but two are erased from the face of the Earth, now ruled by a dozen relentless men. All traces of empathy have disappeared, eaten away by a virus that scars bodies and decimates life, and the only applicable law is the survival of the fittest. It is not clear why this mysterious disease prefers to spare only men, just that what remains of humankind is filthy and obnoxious, leaving no doubt that the future is bound to be even more sinister. Likewise, the future of The New End doesn’t look too bright, as it is difficult to follow and understand the Gordian knot of intentions built into the plot, which is based on an interesting core idea, but fails to go anywhere.

Most of the characters in this unsettling dystopian world are nameless and are merely described according to what they are – for example, the Leader, the Son, the Mother, the Daughter, the Dwarf… But if one expects to find some deep allegory in this practice, then they will be bitterly disappointed. Punctuated by such a huge number of literary devices that they could make one’s head explode, Dietsche’s script is a challenge on many levels: it not only struggles with its attempt to adopt a feminist angle, but it also unfurls a bizarre, out-of-place, intellectualised series of dialogues, grotesque acts of violence and a confusing narrative. Additionally, the use of the first-person voice-over narration by the omniscient Dwarf (Mick Morris Mehnert), who’s filling in the blanks, is imbued with an exaggerated poetic tone. Strangely, what we believe to be his voice actually belongs to aspiring German actor Louis Hoffmann.

The film starts promisingly with a quote from Euripides’ tragedy The Trojan Women, giving us hope that there will be a critical assessment of the aftermath of the apocalypse, or at least a Cassandra-like female lead – neither of which we get.

When the chronicler is introduced, the window to the nihilistic hell of The New End opens with a scene in the forest, with the Dwarf closely observing a gang of armed miscreants under the command of the Leader (Slovenian actor Marko Mandić). The air-headed jeering and grinning skulls could easily have jumped straight out of a 1980s American dystopian movie if they hadn’t been illogically reduced to short scenes of delinquency randomly strewn throughout the movie. Much more rounded is the character of the Leader’s accomplice, the Doctor, played by Sylvester Groth (Goebbels in Inglourious Basterds [+see also:
trailer
film profile] and Colonel Horst Lagerfeld in the TV series Fargo), a decadent resident of a former sanatorium who uses thrill pills to make young men pleasure him in the absence of women. Still more plot-enhancing potential arrives with the appearance of the mysterious Healer (Georg Friedrich), but his character is killed off too soon to give events a much-needed twist.

Right at the beginning of the film, the Dwarf lets us know that the men haven’t seen a woman in years, and he is the only one aware of the existence of a mother (Sabine Timoteo) and her daughter (Milena Tscharntke), both of whom are hidden on a nearby island. The daughter becomes his platonic object of admiration, as he believes her to be the last remnant of innocence left on Earth. Her plight, upon facing reality, could have become the intended feminist agenda if the director hadn’t chosen to leave her strangely mute.

The drab landscapes with their ramshackle houses and barren ground are lit by Roland Stuprich’s bluish-grey photography, which switches to a yellowish palette in the Doctor’s temple of lust, remaining faithful to the atmosphere.

The New End was produced by Filmakademie Baden-Württemberg in co-production with Südwestrundfunk (SWR) and Paxfilm.

more about: The New End 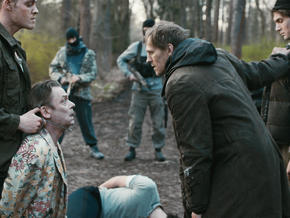 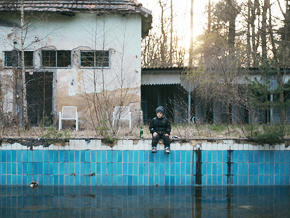 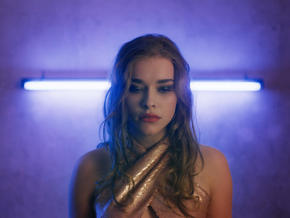