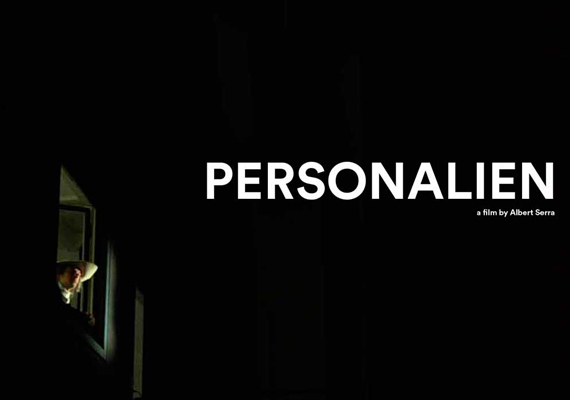 A promo image for Personalien

Albert Serra has recently been presenting his latest artistic creation, Roi Soleil [+see also:
film review
trailer
film profile], at festivals such as FIDMarseille 2018 (where it scooped the top prize: see the news). The 61-minute film has no dialogue, was made in co-production with Portugal and is toplined by Lluís Serrat, and it is the director’s new take – following Last Days of Louis XIV [+see also:
film review
trailer
interview: Albert Serra
film profile] – on the rise and fall of the famous French monarch. Not content with this, Serra is also already immersed in the pre-production and development of his new movie, Personalien - as always with support from Andergraun films - the shoot for which will kick off in Berlin in September.

Personalien also features Serrat as a cast member, accompanied by Xavier Grataós. The movie will portray how, in an environment crackling with tension, intellectual doubt and frustrating creative blocks, Rainer Werner Fassbinder writes and rehearses the staging of a theatre play about the debauchery of the 18th century in a huge Berlin theatre. Personal ambitions, inner demons and a latent desire for psychological revenge sour the relationship between Fassbinder and the actors, particularly Günther Kaufmann, who was formerly the director’s lover and is now married with two children. A clash of values and characters is unavoidable, even though they both need one another for different reasons.

On 22 February this year in Berlin, Serra – an artist who seems to have built up more of a reputation outside Spain than inside the country – premiered his stage play Liberté, starring Helmut Berger, Stefano Cassetti and Johanna Dumet. Set in Germany in 1774, the play features a group of French libertines as the main characters. Having fled Louis XVI’s government and met up with German philosopher Duc de Walchen, they attempt to bring their defiance of the rules and restrictions, which had been part of their everday lives in France, to Germany.

Serra’s work I Am an Artist is also in post-production. Shot last year with backing from the MEDIA programme – Creative Europe, Ibermedia and ICEC (the Catalan Institute for Cultural Companies), it is an ironic and provocative tribute to the world of modern art, with all its flamboyance, theatricality, naivety and “blind faith in the transformative power of art”, according to production outfit Andergraun.

Personalien will be produced by Andergraun films, and it boasts support from ICEC.