01/08/2018 - After an eight-year hiatus, the Spaniard is making a return to movie directing with this tragicomedy toplined by Ernesto Alterio 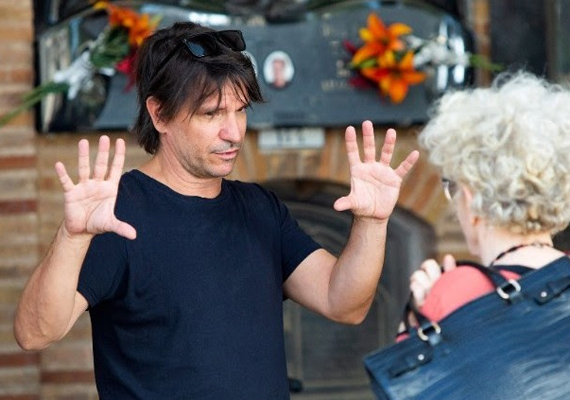 The intermittent career of Achero Mañas, who started off as an actor before turning to directing, has tended to elicit a certain curiosity and sense of anticipation. His cinematic breakthrough, Pellet, in which he discovered child actor Juan José Ballesta, earned him four Goya Awards in 2001. On the heels of this success, he released his next film, November, starring Óscar Jaenada, three years later, but it was not as well received by audiences or critics as his feature debut. Seven years later, in 2010, he gave us the gutsy Anything You Want [+see also:
trailer
film profile], toplined by Juan Diego Botto, but it has been radio silence ever since... Until now, that is, as the 52-year-old filmmaker is making a return to the director’s chair: his comeback is called Un mundo normal (lit. “A Normal World”) and will be a black comedy that sees Ernesto Alterio (Perfectos desconocidos [+see also:
trailer
film profile]) topping the bill.

The shoot for the film kicked off in Valencia on 10 July. According to the synopsis provided by one of the production outfits, it recounts the odyssey of Ernesto, an eccentric and non-conformist theatre director, who is informed of the death of his mother. On his way to the cemetery, the man steals her body from the coffin in order to throw it into the ocean, in accordance with the deceased’s wishes. Ernesto’s daughter, fed up with his lunatic behaviour, goes with him in the hope of changing his mind. Along the way, the girl will discover that her father is no madman and that one has to be faithful to oneself, even if it occasionally means flying in the face of the opinion of the majority.

In the words of the director himself, “Un mundo normal is a metaphor that at times uses a black-comedy tone and at others assumes the guise of an Esperpento-like drama to depict the dilemma of a man who, because of his specific circumstances, has to act outside the law and counter to what those closest to him may think.”

Un mundo normal – the cast of which is rounded off by Magüi Mira (a theatre actress and director with more than 30 years’ experience under her belt), Laura Mañas (who previously worked with Achero on Anything You Want), Pau Durà (who premiered his feature-length directorial debut, Formentera Lady [+see also:
film review
trailer
film profile], a few weeks ago) and Ruth Díaz (Orizzonti Award for Best Actress at the 2016 Venice Film Festival for The Fury of a Patient Man [+see also:
film review
trailer
interview: Raúl Arévalo
film profile]) – is a Last Will Productions AIE, Tornasol Films and Voramar Films production. It has secured support from the Valencian Institute of Culture and boasts backing from RTVE. Latido Films will be in charge of its international sales.