03/08/2018 - This partner-swapping comedy, which is currently being filmed, is being produced by Kiko Martínez, of Nadie es perfecto 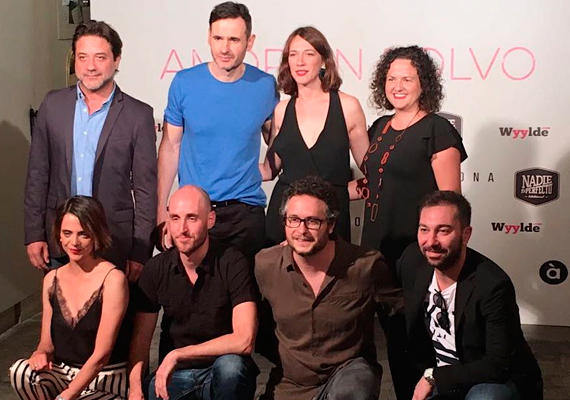 The cast and crew of Amor en polvo

Starring Macarena Gómez (En las estrellas, which is also being produced by Martínez and is about to be released: see the news), Enrique Arce (Money Heist), Luis Miguel Seguí (La que se avecina) and Lorena López (Ella es tu padre) and boasting a screenplay co-written by María Mínguez, María Laura Gargarella and Moscardó himself, it recounts how Pablo and Blanca have decided to dabble in partner-swapping – but they do not observe the first basic rule: don’t do it if you’re going through a marital crisis. To make it happen, they call up two of their single friends, Mía and Lucas, thus also disregarding the second basic rule: always do it with another couple.

The foursome has arranged to meet in a bar, but just before they leave, the couple have a heated argument that prompts them to reconsider all the things they have always believed: ranging from whether they love one another to why the hell they have a Thermomix. Meanwhile, in the bar, Mía and Lucas have just met for the first time and are starting to like each other. But their relationship has no future, because Lucas is (or isn’t) in love with someone else, and Mía doesn’t (or does) believe in love. Is there a difference between making love and having sex? Can you have a relationship without having sex? And can you have sex outside of a relationship without cheating on the other person? These questions and more will (or probably won’t) be answered in this comedy revolving around the complicated task of sorting your life out when you’re on the cusp of your forties.

Amor en polvo is being produced by Nadie es Perfecto and Juanjo Moscardó Rius through his production outfit, Cosabona Films, in cooperation with IVAC (the Valencian regional government), À Punt Media and the Wyylde social network.