16/08/2018 - Other awarded projects hail from Serbia, Croatia and Bulgaria, and Ji.hlava's Docu Talents from the East also held its presentation and announced its prizewinners 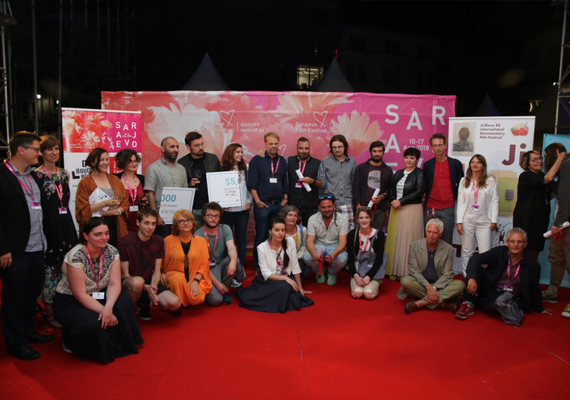 The Sarajevo Film Festival's Docu Rough Cut Boutique, an intensive five-day programme focused exclusively on documentary films from Southeast Europe that are in production or post-production, gave out its awards last night at the ceremony held on the Festival Square by the Sarajevo National Theatre.

The biggest award, comprising €20,000 in post-production services from Digital Cube Romania, went to the Slovenian project Daughter of Camorra [+see also:
trailer
interview: Siniša Gacić
film profile] by Siniša Gačić. The story is about former Camorra assassin Cristina Pinto, who is struggling with the challenges of a normal life after her release from Italian prisons, where she spent 24 years of her life. The project also received the HBO Europe Award, worth €2,000.

Serbian filmmaker Danilo Cekovic received the IDFA Award, consisting of a full invitation to the festival's 2018 edition, for Diary of a Serious Offender.

Croatian director Djuro Gavran picked up the DOK Preview at DOK Leipzig Award, which takes him and his project to the German documentary event, for One of Us [+see also:
trailer
interview: Djuro Gavran
film profile].

This year, the Ji.hlava IDFF's Docu Talents from the East, a presentation of outstanding documentary films at various stages of production and post-production from Central and Eastern Europe, moved from Karlovy Vary to Sarajevo, and included ten projects - for the list, click here.

The Docu Talent Award, in cooperation with Current Time TV, worth $5,000, was shared between the Azerbaijani project Birthday by Hilal Bajdarov and Aleksandr Mihalkovich's My Granny from Mars (Belarus/Ukraine).

At its presentation, Ji.hlava also announced its Emerging Producers for 2019 (click here) as well as the new financial prizes for its competition sections: $10,000 each for Between the Seas and Czech Joy. The newly established Between the Seas student film competition will also have a budget of $3,500 for the main award and $1,500 for the Special Mention.

DOK Preview Award
One of Us - Djuro Gavran (Croatia)