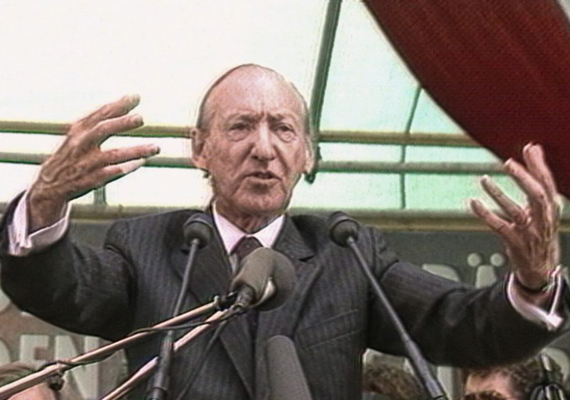 The Waldheim Waltz by Ruth Beckermann

The jury appointed by the Austrian film and music industry association, FAMA, has made its choice concerning the national production that will represent the country in the Oscar race, in the Best Foreign-language Film category. Ruth Beckermann's documentary essay The Waldheim Waltz [+see also:
film review
trailer
interview: Ruth Beckermann
film profile] was deemed a fitting candidate thanks to the "exemplary accuracy" with which it analyses "how we build memory", in reference to the way the media manipulated the public's emotions by diverting attention away from the facts during the 1986 Austrian presidential campaign, when it was revealed that the most prominent candidate, diplomat and former Secretary-General of the UN Kurt Waldheim, had a Nazi past, which he denied – a blatant lie that ended up paying off, as he won the elections.

Basing her movie solely on archive material (including personal footage), the director describes a climate that still resonates today. The Waldheim Waltz, produced by Ruth Beckermann Filmproduktion, and supported by the Austrian Film Institute, the ORF – Austrian Broadcasting Corporation, FISA and Filmfonds Vienna, premiered at this year's Berlinale, in the Forum section, and won the Glasshütte Original Documentary Award.

Since its first Foreign-language Oscar submission in 1961, Austria has racked up four nominees, including two winners (The Counterfeiters [+see also:
film review
trailer
film profile] in 2007 and Amour [+see also:
film review
trailer
interview: Michael Haneke
film profile] in 2012). Now that The Waldheim Waltz has stepped into the race, the second step, on 22 January, will be the announcement of the nominations, in the hope of taking the third and final step at the 91st Academy Awards ceremony itself on 24 February.

The international sales for The Waldheim Waltz are handled by Wide House.