06/09/2018 - VENICE 2018: Presented in this year’s Orizzonti competition programme, Emir Baigazin’s new movie is easily one of the most visually extravagant titles in the section

Kazakh writer-director Emir Baigazin has charmed film festival audiences in the past few years with the movies Harmony Lessons [+see also:
film review
trailer
film profile] and The Wounded Angel [+see also:
trailer
film profile]. They were part of a somewhat bleak trilogy dealing with murder – but if in the first two films, the characters were actually guilty of it, the movie that rounds off the trilogy confines itself to the intention to commit it. Presented in this year’s Orizzonti competition programme at the 75th Venice Film Festival, The River [+see also:
trailer
interview: Emir Baigazin
film profile] is easily one of the most visually extravagant titles in the section – and it reaffirms Baigazin’s position as a daring arthouse filmmaker.

In a remote Kazakh village lives a family with five sons. Their strict and, at times, violent father puts his teenage son in charge of his four younger brothers, and he supervises them in their everyday chores, which include the construction of a barn and tending the livestock. Aslan is a more gentle leader to his brothers than his father is, and is forgiving of their mistakes. As the film turns more and more surreal, he leads them to the river, which seems to change their lives. After they take a few strokes through its glistening, enchantingly blue-green waves, they can’t help but come back over and over again. In addition, the way they carry out their daily chores is completely transformed – that is, until a mysterious visitor, Kanat, arrives in the village, carrying a tablet containing computer games, which entice the younger boys away from their brother.

Baigazin has for the first time not only written and directed the film, but has also served as the cinematographer. In his hands, The River becomes a delight for the eyes, and he utilises an elegant yet subtle feeling for composition, dreamy blue and beige hues, spacious wide-screen frames, and a leisurely camera to their best effect. The film’s images indicate a story tiptoeing somewhere between the real and the mythological world, between the realm of the symbolic, something akin to a collective unconscious, and some very concrete details of today’s globalised world – like popular culture and technology invading peaceful, rural, traditional lives outside of Western civilisation.

It is hard to say what to make of an intriguing premise like this. The arrival of Kanat – who brings the only sense of a specific time period to an otherwise ahistorical story – in what turns out to be a refuge from the outside perils functions as a deeply disruptive presence. Are we to take it as some kind of warning against the advancements of society, with rural tradition being idealised in a somewhat short-sighted way? Or are the elemental qualities of the film pointing to something else? Perhaps to a presence that can be just as ambiguous, signifying a destructive force at times, and at others pointing to deeply entrenched ideas of conventionality when it comes to perceiving the world. The River doesn’t lend itself to easy answers, which could be its biggest flaw, but it is also a strength – it can function very efficiently as a reflection of the viewer’s mind, much like on a river’s shimmering surface, where each person will get a reflection of exactly what they wish to see in it.

more about: The River

“The most important thing for me was the spiritual component”

VENICE 2018: We talked to Kazakh director Emir Baigazin, who presented his third feature, The River, in the Orizzonti competition programme and won Best Director to boot

VENICE 2018: The Netflix film wins the Golden Lion, handed to Cuarón by his fellow countryman and previous winner of the award, while the Grand Jury Prize goes to Yorgos Lanthimos for The Favourite

Alessio Cremonini’s On My Skin to open Orizzonti 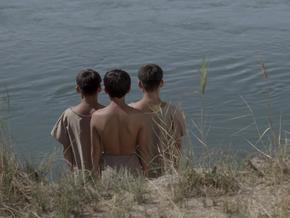