VENICE 2018 Out of Competition

10/09/2018 - VENICE 2018: US documentarian Errol Morris talks to former chief strategist in Donald Trump’s administration Steve Bannon in his film presented out of competition

The idea of a film in which Steve Bannon discusses films is anathema to some, because many believe Bannon was President Donald Trump’s kingmaker. Bannon was seen as the man who gave Trump the strategy to swing the election the Republican’s way. Whatever his ethics were for giving this ideology a platform or influence during the election, famed American documentarian Errol Morris has hit upon a winning strategy in discussing films with the former Trump aide. Bannon has a refreshing perspective on the films and characters discussed, even if it at times his interpretation seems slightly deluded. And at the Venice Film Festival, where American Dharma is playing out of competition, everyone is talking about films anyway, so why not hear Bannon’s take? After all, this year’s official Venice competition selection has demonstrated how the age of the middle-aged white male filmmaker is alive and kicking.

Errol Morris pays homage to Bannon’s favourite film, Henry King’s Twelve O’Clock High (1949), by placing the interview in a Quonset hut. Morris is genuinely interested in what Bannon has to say about a film that deals with leadership and galvanising support, and it’s quickly apparent that this is not an attempt to hoodwink his subject. They discuss Stanley Kubrick’s Paths of Glory, Orson Welles’ Chimes of Midnight and even Morris’ own The Fog of War, which apparently inspired Bannon to delve into producing. The discussion that is dwelt on the most is due to their differing opinions on Falstaff when Hal is crowned King Henry V in Chimes About Midnight. Morris believes Falstaff’s tears are of sadness, while Bannon sees it as a sign that he recognises his job is done and is proud. There are parallels of this discussion to the Bannon and Trump relationship that give this debate and others subtext.

The films act as trailers to the discussions they have about the election, ideology and Trump. It’s the meat of the film and Morris gives Bannon the space to spout his opinions. Occasionally he confronts him, most notably due to Morris viewing the removal of layers of government policy being in contradiction to the populist policy of keeping jobs in America. Oddly, Morris doesn’t push Bannon into a corner or try and hammer the point home – it’s not that kind of journalistic exercise. We learn about Morris too; the director admits he annoyed his son by voting for Hillary Clinton over Bernie Sanders in the Democratic primaries because he felt she was the only person able to stop Trump and not because of any political conviction. There is some regret over this in a film that is as much about Morris finding something cathartic in Trump’s election as it is Bannon taking advantage of the platform he is being given to spread his tawdry alt-right ideology.

VENICE 2018: US documentarian Errol Morris talks to former chief strategist in Donald Trump’s administration Steve Bannon in his film presented out of competition 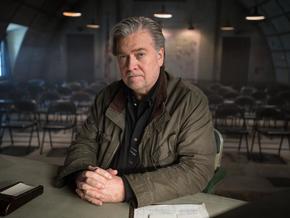