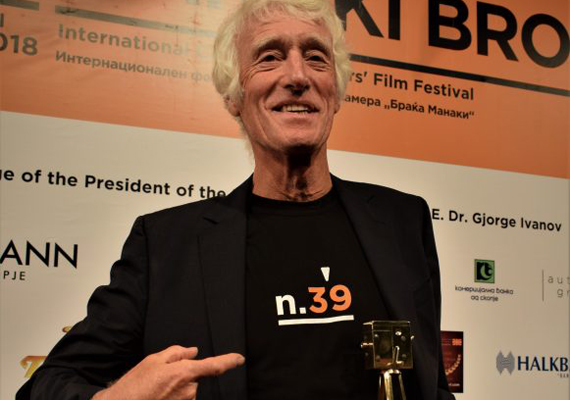 DoP Roger Deakins with his Golden Camera 300 for Lifetime Achievement

The 39th edition of the Manaki Brothers International Cinematographers’ Film Festival in Bitola, Macedonia, took place from 22-29 September and screened 95 films across 14 sections.

"It was truly a wonderful experience to shoot in China; the main actors were very inspirational, but the rest of the crew was as well. However, I would like to dedicate this award to one of the people who were a great inspiration to me when I became a cinematographer, and who was also a great friend of this festival, Robby Müller. If you look closely in the film, you can clearly see his influence," Gautier said as he accepted the award. The recently departed Müller received the festival's honorary Golden Camera 300 for Lifetime Achievement in 2016.

The gathering also featured master classes by Deakins, DoP Christian Berger and production designer Christoph Kanter, who spoke about creating the visual style on three films by Michael Haneke. This master class was hosted by the training programme First Films First, currently in its third year.

In addition, the Federation of World Cinematographers IMAGO held its Balkan conference at Manaki Brothers, and Gorjan Tozija, director of the Macedonian Film Agency, and Massimiliano Nardulli presented the collaboration between the agency and the Less Is More programme, created by Le Groupe Ouest (France).