The title of Carl Hunter’s debut feature, Sometimes Always Never [+see also:
trailer
film profile], is a reference to the convention of how a three-buttoned suit jacket should be done up – sometimes the top button, always the middle and never the bottom. With the wearing of suits, especially three-piece ones, seen today as an item for very special occasions, it’s a rule that many do not know, or care to know. While for some, such rubrics seem whimsical and eccentric, for others they are sacrosanct, and this is how people are divided in Sometimes Always Never, which premiered at the London Film Festival, in the Laugh strand.

The compulsion to do things the right way is a trait of widowed tailor Alan (Bill Nighy). That the world doesn’t always agree with him has led to a tortured life and one that has increasingly rankled him. It is also the source of the dapper gentleman’s heartache, as way before the action starts, his eldest son rushed out of the house over an argument during a game of Scrabble, never to be seen again and now presumed dead. Should Alan have been such a stickler for the rules?

Alan’s current state of mental undress is established in the first scene, where we discover him looking remarkably dapper standing under an umbrella on a windswept beach in the North of England, looking out to sea. It feels like such a classic Nighy pose that it’s hard to believe anyone else could pull off this role.

Director Carl Hunter was a bassist in the British indie-pop band The Farm; he also orchestrated the artwork for the band, designing record sleeves and posters, showing a penchant for bright colours, bold designs and retro. The songs were big on community and brotherhood, so it’s no surprise that the most striking feature of his debut feature film is the production design, where heightened reality becomes part of the story. There are words on toothbrushes, back projections on car journeys, and painted backdrops. It has a touch of Wes Anderson in its quirky style and whimsy, but here, all of the references seem to be British, and from the late 1970s or early 1980s.

The storyline sees Alan and his second son, Peter (Sam Riley), embark on a road trip in order to try to repair their own strained relationship caused by differing responses to their shared family grief. They have been called to see a body, but would closure actually help? “It’s not knowing that is the hardest,” is immediately countered by “Hope is a great friend.” There is a skewed sense of time and place in the production design and cinematography of Richard Stoddard, which is reflective of Alan’s state of mind, as he has been unable to move forward with his life and remains very particular about how things should look. The script is by Frank Cottrell-Boyce (24 Hour Party People [+see also:
trailer
film profile]), whom Hunter worked with on writing the screenplay for the social drama Grow Your Own (2007), but it is subordinate to the visuals, and the emphasis on melancholy and humour comes at the expense of a strong, driving narrative. Not that that matters, as this is a film about emotion, full of heart and compassion, and with plenty of pleasures in store. 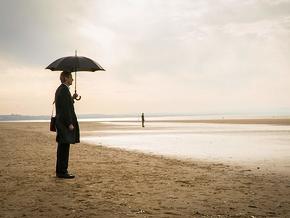