Review: I Had a Dream

I Had a Dream [+see also:
trailer
interview: Claudia Tosi
film profile]: the fact that this foreboding title is in the past tense, announcing a retrospective angle, prepares the viewer for a closed narrative, articulated around a path freighted with meaning that leads to a scathing conclusion, enough to annihilate anyone’s dreams. It is therefore in a certain frame of mind, tense with expectation of the film’s analysis and conscious that its intentions will exceed the means of their formulation, that we approach Claudia Tosi's film, presented in world premiere at DOK Leipzig, for which she won the Golden Dove in international competition. And indeed, what we witness during the political careers and lives of two friends and elected Italian members of the Partito Democratico, in post-Berlusconi Italy, is the profound and stinging defeat of politics and democracy itself.

The story of Manuela, MP, and Daniela, a city council member, told intimately and in full without ever ceasing to maintain an elegant air of respect, fits into the context (and this is the challenge for the protagonists at the beginning of their journey) of an Italy where "Berlusconism," an attitude governed by the "total disinterest of the Other," which has "ruined" the country and is expressed in shameless sexism, continues to creep in violent insulting messages sent to the elected official on Facebook, the harmless words of ordinary citizens and the jokes made by a party colleague about women’s manners, who acts as if it’s nothing. Because it’s a matter of fact that women aren’t allowed to act in the same disrespectful manner. And so, they keep their calm.

The fact that Manuela and Daniela are forced to fight for women's rights in this notoriously patriarchal society is inevitable, but Tosi's film also shows how, whether they like it or not, we often tend to "reduce" them to this one mission alone, and to one-off actions in general, when what they really want is to implement an overall project for the country, a dynamic which we experience here in immense frustration. Indeed, throughout this political journey (the initial momentum, the throes of the campaign, the innumerable obstacles...), we watch as the protagonists, still being filmed today, venture to a cinema to comment on footage recorded ten years earlier in the light of their total and absolute despondency.

The documentary doesn't tell us when Tosi came up with the idea to use ​​this device, but it makes the tragic impotence of two elected and disillusioned officials almost palpable. This political failure – the failure of politics – Manuela sums up with a wisdom that leaves food for thought when she explains – while an elector says he appreciates her availability – that the role of an elected official is not just to answer the phone to everyone, and that the expectation of citizens – who are growing increasingly distant from institutions and negate the very principle of representation – has sealed the fate of democracy by throwing it into the arms of populism.

I Had a Dream was produced by Movimenta in co-production with Cosmographe and France Télévisions. The film's international sales are being handled by Deckert Distribution.

more about: I Had a Dream

Interview: Claudia Tosi • Director of I Had a Dream

"A desire to roll up our sleeves"

Claudia Tosi, winner of three awards at DOK Leipzig, including the Golden Dove, talks about I Had a Dream, a film about the political journeys of two Italian women over the last ten years

Review: I Had a Dream

In her first feature film, Valentina Primavera uses a personal story to make a frightening statement about the ordinary, atavistic violence that's paralysing her country 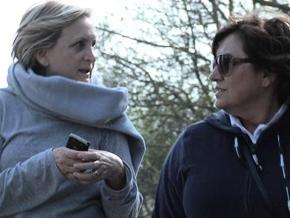