30/11/2018 - Juan Vicente Córdoba revisits the Spanish cinematic imagination of the 1970s and 1980s through a set of characters living on the margins of society, with indifferent results

The Spanish film movement known as cine quinqui, originally a commercial genre cranking out action films with a social conscious, was elevated to cult status thanks to its rediscovery by filmmakers, journalists and academics in subsequent decades — as is apparent from the superb exhibition at San Sebastián’s Artegunea de Tabakalera on one of the movement’s most notable originators, Eloy de Iglesia, which finished in early November. Now poised to hit Spanish cinemas, following an outing in the DOC Spain section of Seminci (Valladolid International Film Festival), is the documentary Quinqui Stars [+see also:
trailer
film profile], embellished by fiction and directed by Juan Vicente Córdoba.

The Madrid-born director has explored the fringes of the Spanish capital and its conflicted denizens in previous works, prime examples being the short film Entrevías and the feature film A golpes, both starring Daniel Guzmán. Guzmán, who highlighted the issues facing young people in the suburbs in his own directorial debut, Nothing in Return [+see also:
film review
trailer
interview: Daniel Guzmán
film profile], pops up like a special guest in Quinqui Stars, alongside fellow actors José Sacristán and Enrique San Francisco. Presenting the documentary, rapper El Coleta talks with them about this Spanish film phenomenon of the 1970s and 1980s, featuring young delinquents and spearheaded by directors like Carlos Saura, José Antonio de la Loma and the aforementioned Eloy de la Iglesia.

It is these interviews, illustrated with scenes from films dating from that time, that hold the most interest in a film that never quite finds its feet, vacillating between sociology and cinematography in its efforts to transpose the same conflicts and social issues to the present day. Indeed, Guzmán argues that the artists who forged today’s trap music scene — La Zowi, La Flavi, Ms Nina and Bea Pelea, to name a few — are the successors to the likes of “El Vaquilla”, “Pirri” and “El Torete”, whom we watched as they fled from the police, stole cars and shot up heroin in titles shown in continuous sessions in neighbourhood cinemas all across Spain.

That connection doesn’t quite gel in this well-intentioned but confused documentary, which doesn’t delve deeply enough into the movement it is exploring nor the music that it claims as the quinqui phenomenon’s heir — let alone the sociological factors that gave rise to both (best just to pass over the film’s more unfortunate cinephilic digressions). It’s a shame, because the subject deserves much more than a simple succession of conversations, musical interludes and rambles through Madrid’s outer suburbs.

Quinqui Stars was produced by Dexiderius Producciones Audiovisuales and Promarfi Futuro 2010 in coproduction with Galoproductions (France). It will be distributed in Spain by Syldavia Cinema from 30 November.

Juan Vicente Córdoba revisits the Spanish cinematic imagination of the 1970s and 1980s through a set of characters living on the margins of society, with indifferent results 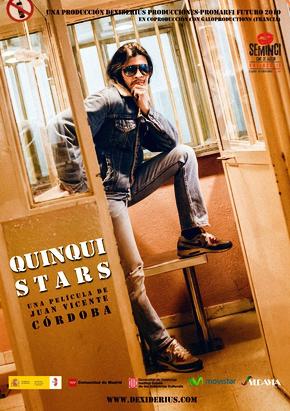