24/01/2019 - The young video artist, Ana Shametaj films a group of actors at a residence in the woods while they rehearse for a show at the Teatro Valdoca

A group of 12 actors spends three months rehearsing, studying and living together at a theatre in the middle of the woods on the Romagnolo Apennines. Young video artist Ana Shametaj, from Trieste and of Albanian origin, films the actors in order to document their experience in Wild Words [+see also:
trailer
film profile], which is in competition for the Corso Salani Award at Trieste Film Festival.

Among the young actors is Ondina Quadri, the star of Arianna [+see also:
film review
trailer
interview: Carlo Lavagna
film profile], Carlo Lavagna's debut film, which was presented at the 72nd Venice Film Festival and earned the actress a Golden Globe for her performance in 2016. The rehearsals are for a show called Giuramenti (lit. Oaths) at the Teatro Valdoca di Cesena, a historic Italian theatrical company founded in the early 1980s by Cesare Ronconi, director, and Mariangela Gualtieri, poet and playwright, who both still run the company. The documentary shows the actors rehearsing at Dimora di Mondaino Theatre in the province of Rimini in the region of Emilia-Romagna. The cast arrives to partake in physical and artistic rehearsals, marches in the woods, shopping in the village, cooking and group meals, haircuts, read-throughs, as well as doubt and abandonment, all while maintaining control and overcoming a few relational stumbling blocks in this closed space, in which so much energy circulates. Ronconi himself expresses his uncertainty in front of Ana Shametaj's camera when he has to dealwith problems with the neighbourhood, due to people trespassing in the camp. He gives the actors useful advice for existence beyond their artistic lives: 'Never be too explicit in your relationships. Desire is a very profound, internal and mysterious thing. It is the thing that makes everything move. You need to create something secret, not something obvious.'

The show’s lines are written during the course of the rehearsals. Mariangela Gualtieri writes for the actors, taking into consideration their individual personal traits. She reads Pavese's poems to the group, inviting them to improvise, shout out words or modulate the choir. And the choir seems to be an essential element of the show, around which their solemn 'oaths' take shape. The documentary depicts the creation of a play, but it also bears witness to the radical work of Cesare Ronconi and Mariangela Gualtieri, both of whom are trained in the theatrical poetry of Tadeusz Kantor in Kracow, Jerzy Grotowski's Workshop Theatre, Peter Shumann’s American experience, the Bread and Puppet, the experiments of Bob Wilson, Richard Foreman, the Squat Theatre and the important Italian figure, Carmelo Bene. The actors Ronconi trains move as a dancing body with a poetic voice, a body with a sense of animality and epicness, in a ritual that rejects the need for narration.

Ana Shametaj shot hours and hours of footage for the project, with photography handled by Greta De Lazzaris. The intention was to translate theatre into cinema, and create a fluid narration, thanks to the excellent contribution of editor Jacopo Quadri (who more recently collaborated with Mario Martone on Capri - Revolution [+see also:
film review
trailer
interview: Mario Martone
film profile] and Paolo Virzì on Magical Nights [+see also:
film review
trailer
film profile]). Quadri was involved in the project as an executive producer, as well as editing the film with Nicolò Tettamanti. Wild Words was produced by Ubulibri with Teatro Valdoca, in collaboration with RAI Cinema.

The young video artist, Ana Shametaj films a group of actors at a residence in the woods while they rehearse for a show at the Teatro Valdoca 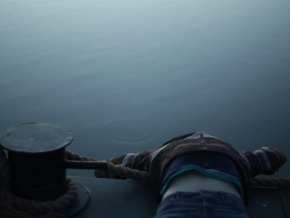