Lorna Tucker’s debut documentary, Westwood: Punk, Icon, Activist [+see also:
film review
trailer
interview: Lorna Tucker
film profile], looked into the frivolous world of fashion and found a political angle, veering away from a biography style to highlight fashion designer Vivienne Westwood’s battles to raise awareness of the destruction being wreaked by climate change. When Westwood very publicly denounced Tucker’s depiction of her after its Sundance premiere, it only served to highlight just how talented Tucker is. As a director, she’s willing to tell her version of the story, in her own voice, no matter the fallout. The British director began making Amá [+see also:
trailer
film profile] (the Navajo word for "mother") nine years ago (long before she started her aforementioned nominal debut film), and this strong-willed determination to be authentic and true to what she witnesses is evident as Tucker investigates and exposes the non-consensual sterilisation of Native American women in North America. Amá is having a DocDays screening in London tonight.

A voice-over from Tucker, as she drives along one of those classic long American roads that brings to mind Wim Wenders and David Lynch, sets the advocacy-heavy tone of the picture. She announces that ten years ago, she read a report that said that thousands of Native American women had been sterilised without their consent, and she wanted to find out more. It was nearly impossible to find someone willing to talk, but this changed when her journey led her to New Mexico, where she met 67-year-old Navajo Indian Jean Whitehorse. It is the testimony of Whitehorse that is the beating heart of Amá, as she describes how she thought “I was the only one” who had been forcibly sterilised. She outlines her upbringing, the boarding school where pupils literally had their mouths washed out with soap if they spoke in their native tongue, and how she signed a piece of paper without realising that it meant she was condemning herself to a childless life. Tucker also shows how she is an interventional filmmaker, encouraging Whitehorse to go to Green Bay, Wisconsin, where her testimony can be recorded at a hearing. The stories told are heart-wrenching.

In trying to discover more about how such a policy could have been implemented in the 1960s and 1970s, Tucker seeks out physician Reimert Ravenholt, whose name keeps cropping up in reports. It’s a candid interview. Just hearing him talk and listening to the toxic beliefs that he is voicing demonstrates how such heinous practices became commonplace. Outraged by the silence surrounding the issue, Lorna Tucker also populates her work with archive footage that gives credence to the testimonies and interviews being conducted by the director herself, and also contextualises the Native American story within the civil rights movement.

The documentary does suffer from some wayward camerawork, and the filmmaking is uneven, which is perhaps no surprise, given how long this movie has been in the making. The subject matter feels important, but in terms of filmmaking craft, it’s a solid work, rather than spectacular. Nevertheless, when judged on Tucker’s intention to draw attention to the practice (the last documented case was as recent as 2017) and encourage women to step forward, the film has worked wonders. Indeed, since its initial screening at the Global Health Festival in London in December 2018, over 100 other women have come forward.

Amá is a British production staged by Raindog Films in association with Bedlam Productions, and it is being distributed in the UK by Dartmouth Films. 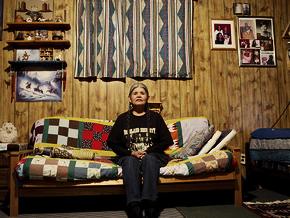