The Italian-Swiss director duo Francesca Scalisi and Mark Olexa continue their documentary work with their second feature film, Digitalkarma [+see also:
trailer
film profile], in competition for the Prix de Soleure at Solothurn Film Festival – an honest and contrasted portrait of a girl from Bangladesh trapped between a dream world and harsh reality.

Digitalkarma – released after Ligne noire (Winterthur's Best Short Film Award), which also focused on a mysterious female figure – details four years in the life of Rupa, a young girl from Bangladesh. Four years in which she battles to make her dreams come true: to have a dignified and useful job that frees her from her destiny as a woman, wife and mother.

Will her determination and strength be enough to free her from a life of hard work (at a massive tea plantation) and a destiny that seems to be written in the stars? Her father's open spirit – who encourages her to study in order to dodge the forced marriages imposed on her sisters – initially gives us hope, as if this margin of freedom might just be enough to break down the traditions of an ancient and obstinate country.

Unfortunately, however, Rupa’s story is real, and as in reality, in order to truly understand it, we must take the time to consider the nuances of the situation. Indeed, Rupa’s obligation to marry a stranger and to surrender to such a fixed way of life seems unbearable and strange, but refusing to attempt to understand it or at least explore its roots would be tantamount to brandishing the enemy’s sword.

In order to avoid turning Digitalkarma into a Euro-centric interpretation of an extremely complex situation, Mark Olexa and Francesca Scalisi decided to entrust the story to the protagonist herself. And although Rupa may not be completely in charge of her own destiny, at least she can tell her own story.

Never directly present in the film itself, the directors give their protagonist (through a video diary and scenes in which Rupa films her life with a small digital camera) the freedom to show us the aspects of her life she deems important. We don’t witness tears or anger until the end, during the wedding ceremony. Rupa, now deprived of a means of escape, must come to terms with a reality she never previously wanted to consider. It's well-understood that the film is the work of its directors (thanks to its editing and mise-en-scene), but they never impose their presence or act as advocates of a story that is already very far submerged in its own rules and dogmas.

After the screening, a viewer asks the directors if certain scenes were staged, as if this somehow takes away from the story's truth. Ultimately, however, as demonstrated by Digitalkarma, lifeis always a set-up. The only thing that changes is how benevolent or tyrannical a director chooses to be, and whether they remain open to dreams and creativity or impose a strict screenplay. Rupa managed to turn her life into a colourful story, perhaps her daughter will one day write the rest.

Digitalkarma was produced and is being distributed internationally by Dok Mobile.

The films selected for the festival's 54th edition all question the meaning of life and spirituality: universal themes that never cease to fascinate 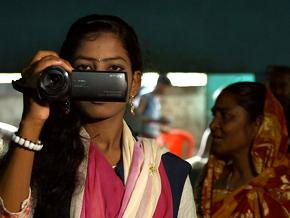