With a screenplay written by Fontana himself, and guest featuring the great José Sacristán, Boi is also the name of the film’s protagonist, a young man nearing his thirties who’s going through a particularly confusing time in his life. This aspiring writer, whose (pregnant) girlfriend isn’t taking his calls, begins work as a driver. His first job is to collect two arrogant Asian business men from Barcelona’s airport and to drive them to the city to close a shady business deal.

This is the beginning of a few intense days for Boi. He finds himself immersed in a strange world, packed full of worrying elements, which leads us to wonder, at a certain point, whether what he is experiencing is actually real or whether it’s just some kind of hideous nightmare, with characters who appear over and over again, the distinctively oppressive aura of the nightclub, the presence of moderate (and, at times, explosive) violence and the surreal dialogues which run through the film. Meanwhile, the Barcelona which Boi travels through in his gleaming car is a rather unsettling version of the city, and this eerie atmosphere is further amplified by the soundtrack – think Eighties electronica – composed by El Guincho (who worked with the singer, Rosalía, on her acclaimed album, El mal querer) for this film, which was shot in 35 mm and in which the viewer can detect great admiration for masters such as David Lynch, Michael Mann and Martin Scorsese.

Though the plot revolving around the Chinese characters is somewhat confused, the lead actor (Bernat Quintana) is slightly lacking on charisma, and the conflict between taxi drivers and the app-based ride-hailing services, which has been all over the Spanish media these past few months, barely gets a mention, Boi – with its French, English, Mandarin and Castilian dialogue – does keep the viewer in suspense. It offers us phantasmagorical moments of narration, as well as heralding the return, albeit in a small role, of David Sust, whom we last saw exacting revenge on the Nazi who tortured him as a child in the cult 1988 film, In a Glass Cage, by Agustí Villaronga.

Boi is produced by Aquí y Allí Films and Versus Entertainment with the support of the ICAA. It is distributed and sold worldwide by Filmax.

The director is currently in Florida shooting his second film, following Here and There, once again produced by Pedro Hernández for Aquí y allí Films

Review: My Donkey, My Lover and I 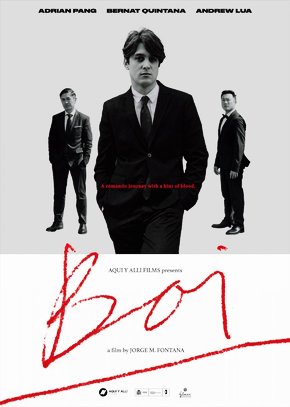