Samurai Marathon [+see also:
trailer
film profile] by writer-director Bernard Rose (Candyman, ivansxtc) had its European premiere at the Edinburgh International Film Festival, following its world premiere in Japan back in February. Inspired by a real-life event, the action takes place in 1855 with American "black ships" closing in on the shores of Japan. Katsuakira Itakura (Hiroki Hasegawa), the feudal lord of Annaka, organises a 36-mile race to train and test his samurai who, after a long period of peace, have become “weak and undisciplined”. Even though the race doesn’t take off until halfway through the film, it serves as a frame for this tongue-in-cheek drama that takes a little time to pick up speed.

One of the samurai, Jinnai Karasawa (Takeru Satoh), has a secret: he’s a spy for the shogun, just like generations of his family before him. When the lord suddenly summons his samurai, Jinnai assumes it must mean rebellion. He sends the shogun a letter informing him of a planned attack. When Jinnai realises his mistake – there’s no uprising, just a drill – it’s too late: the letter is on its way, and Annaka can expect the arrival of the shogun’s assassins.

The action sequences take over later in the story, which means that for a large part of the film, the main focus is not on violence. But when the fight scenes do come around, they are well staged and choreographed, and the lethality of the blades is acutely present.

The audience is given moments of comic relief alongside the darker sections of the narrative. The characters that are tasked with carrying the lighter side of the story are a running duo consisting of the lord’s retired guard and a diseased samurai’s offspring wanting to prove himself worthy of his father’s name. Though a charming pair, the jokes don’t always deliver the goods and can feel a tad too forced. Instead, the more subtle bits that involve shots of the many young, out-of-shape samurai just trying to get through the race are more naturally funny.

The gorgeous cinematography by DoP Takuro Ishizaka (Manhunt, God of War) is a real feast for the eyes. The appealing shots of fields full of flowers and the woods create an unnerving symbiosis with the violent moments, enhanced by the beautiful scenery. The indoor scenes excel with the masterful use of lighting, especially in the nocturnal sequences where the warmth of the light creates an alluring, luminous atmosphere.

Samurai Marathon is not perfect. It takes a while to get going, while the ending is tied up a bit too cleanly and easily. Nevertheless, it manages to combine long-distance running with action and twists in an enjoyable way. It won’t exactly keep one on the edge of one’s seat, but as far as eye-pleasing entertainment goes, it successfully fulfils its purpose. 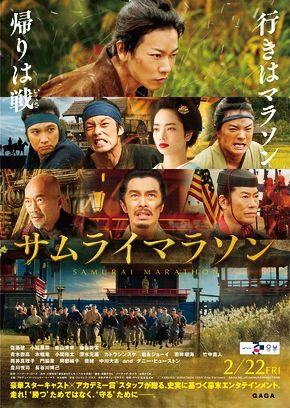