Schemers [+see also:
trailer
film profile] won the Audience Award at the recent Edinburgh Film Festival, where it had its world premiere in the Best of British strand. It just goes to show that with the right amount of nostalgia, a local film that is breezy and entertaining can be forgiven for its many deficiencies. With Schemers landing so soon after the arrival of Brian Welsh’s ode to rave culture, Beats [+see also:
film review
trailer
film profile], it seems that Scottish cineastes are pining for their musical past.

Schemers is a semi-autobiographical caper from first-time writer-director Dave Mclean about how he got into the music promotion business in Dundee. After a bad tackle on the football field, he falls for the nurse looking after him and tells her that he runs a disco night in an effort to impress her – and the rest, as they say, is derivative of Danny Boyle’s Trainspotting and Guy Ritchie’s Lock, Stock and Two Smoking Barrels. The visual storytelling style has all the hallmarks of Britpop cinema, which means it is full of fast cuts, freeze-frames and voiceovers that seem designed to paper over the cracks of a very light narrative and some over-the-top acting, especially from the cartoonish gangster villains. While the action is set in the 1970s and 1980s, the storytelling style means that the film has a 1990s feel to it, which just goes to show that memory is a hazy, funny thing.

Mclean recounts the story of his past like he’s bragging to his mates in the pub. It’s rose-tinted, overly romanticised and makes daft antics seem heroic. As a storyteller, Mclean is less concerned with the interior emotional upheaval of his main character and instead indulges in lad culture, forgetting that it has gone out of fashion. Schemers feels like a film from a bygone era and one that has nothing to do with its period perspective.

The caper is aided somewhat by the charming debut by local actor Conor Berry. Mclean should be commended on his desire to seek out local talent in Dundee and put them on screen. Berry is the film’s anchor, carrying an energy that is amplified by Khaled Spiewak’s editing. It’s just a shame that the personalities surrounding him are such caricatures. Tara Lee makes as much as she can out of her underwritten nurse Shona, who serves as little more than eye candy, despite being the bookend to the film – she is the reason why Davie gets into promoting, and it is because of her that he is finally forced to come to some realisations. His best friends and sidekicks Scot (Sean Connor) and John (Grant Robert Keenan) leave less of a lasting impression.

But its lack of emotional depth can also be seen as its selling point. Schemers is a debut movie that is told at a fast clip, with an emphasis on having a laugh. The concerts come thick and fast, and there is much to admire in terms of the soundtrack. There is also something charming about telling a story about yourself, where the emphasis is on happenstance.

Schemers is a UK production staged by Black Factory Films and Riverman Management. Its international sales are handled by The Film Festival Doctor.

The EIFF, which this year runs from 19-30 June, boasts 18 world premieres amongst the 121 feature films set to screen 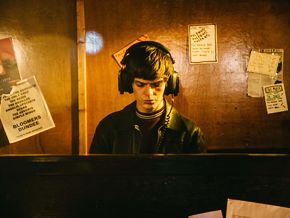 EXCLUSIVE: Trailer for Locarno competition title Matter Out of Place