KARLOVY VARY 2019 Out of Competition

05/07/2019 - Yet another local icon gets the star treatment at Karlovy Vary, in a film that feels less like a documentary than a full-blown tribute, clearly more suited for the local crowd

After last year’s Jiří Menzel – To Make a Comedy Is No Fun comes Jiří Suchý - Tackling Life with Ease [+see also:
trailer
film profile], as life lessons at Karlovy Vary are clearly learned courtesy of the men who earned their silver hair by making people laugh. Or hum, as that’s the case here, with Jiří Suchý’s achievements known best among music aficionados, still grateful for his Semafor theatre in Prague or the 1965 Karel Gott vehicle If a Thousand Clarinets. Predictably, this renders the film’s appeal that much more limited, and a distinct TV feel to the whole thing certainly doesn’t help.

Olga Sommerová’s film may just as well have been called Tackling Jiří Suchý with Ease, as she is not out to question or investigate, but rather to celebrate: the songs, the jokes, the joie de vivre. This makes it much better suited to a smaller screen, as even as the anecdotes start to pour in, there is not enough to justify the running time of 104 minutes (especially given that this is not the first time that Suchý has appeared in front of the camera as “himself”), however catchy his refrains might be. While some of the archive footage doesn’t quite cut it in the #MeToo era – who knew a pianist, of all people, would be so handsy? – it quickly becomes obvious that ever since falling in love with Laurel and Hardy as a child, Suchý was always at his best in a duo, creating a long-lasting creative partnership with Jiří Šlitr and then Jitka Molavcová after his passing. This makes it almost a love story, really, although Jiří Suchý certainly has enough energy for two – way too energetic for the whole “talking heads” set up, he ends up wandering around, unable to sit still, even at over 80 years old, playing the accordion, reading his poetry or watching the films that shaped him.

He is an engaging, gossipy presence, celebrating the good times with gusto (there is a nice bit about Miloš Forman “adjusting his child” for a Christmas photo) and not concentrating on the bad ones for long, even when recounting his former colleagues’ rather brutal assessment that while his play was perfectly fine, it would have been much better without him. But one can’t help but wish that his director would dare to delve a bit deeper and not just fast-forward through all the ugly stuff.

“Laurel and Hardy were the adults doing dumber things than children,” he says at one point, showing that you can build a career out of following that very rule, and having a blast every step of the way. Maybe life lessons should be learned courtesy of the men who earned their silver hair making people laugh. Just make sure to stay a bit further away from the pianist next time.

Written by Olga Sommerová, Jiří Suchý - Tackling Life with Ease is a Czech-Slovak co-production staged by Viktor Schwarz, of Cineart TV Prague. It was co-produced by Česká televize, Arina Sk and Zámek Liteň, and is being distributed by CinemArt, a.s.

Documentary on Karel Gott, the “Frank Sinatra of the East”, in the editing room

The Bulgarian duo's new film received the Crystal Globe, while the other big winner of this edition was Lara by German filmmaker Jan Ole Gerster, taking home two awards

Yet another local icon gets the star treatment at Karlovy Vary, in a film that feels less like a documentary than a full-blown tribute, clearly more suited for the local crowd 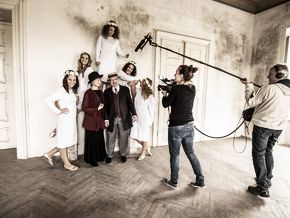 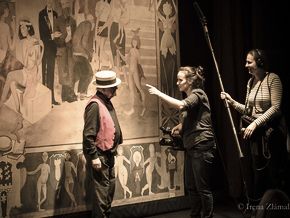 Petty Thieves comes out on top at When East Meets West

IFFR’s CineMart is all set for its 39th edition

Clermont-Ferrand goes ahead with in-person edition of festival

Adrián Silvestre • Director of My Emptiness and I

Following his second feature, Sediments, the Spanish filmmaker continues to explore the conflicts of transexual identity in his new film