10/07/2019 - Pavol Pekarčík has made what is so far the warmest Slovak docu-fiction drama about the Roma population, one of the staples of the country's modern cinema

Now, Pekarčík has brought his new film, Silent Days [+see also:
trailer
interview: Pavol Pekarčík
film profile], arguably so far the most accomplished and certainly the warmest portrait of this – at best marginalised and at worst openly oppressed – community to the East of the West section of the Karlovy Vary International Film Festival.

The fragmented narrative consists of four stories about hearing-impaired Roma children. Each chapter is named after a protagonist, and in the first, 12-year-old Sandra is a big fan of Ronaldinho, trains as a footballer and dreams of meeting her idol. She lives with her family in squalid conditions, much like all of the characters in the film. Her parents discuss leaving the country, but also the option of marrying her off and making some money out of it.

The much younger Marian in the second story loves watching trains at the local railway station, in addition to replaying his idol Jean-Claude Van Damme's breakout movie Bloodsport ad infinitum. Coincidentally, the former martial-arts star is about to visit a neighbouring town, and it is a joy to watch the kid try out the moves from the movie in front of a billboard advertising his arrival.

In the third story, Alena and Rene are teenagers in love, and when she gets pregnant, they wonder if their child will be deaf, too. This concern does not stop her from smoking during pregnancy, and some of her exchanges with her worried best friend are downright hilarious, as are her interactions with her wider family. This will work especially well for viewers somewhat acquainted with the nature and habits of Roma communities.

Finally, Roman, Kristian and Karmen are focused on helping their parents finally build an actual bathroom next to their ramshackle cabin on the outskirts of a town. This segment shows them collecting scrap iron and other materials against a battered, post-industrial backdrop of unfinished buildings and defunct factories.

Pekarčík has opted for an approach that has more in common with photography and painting than with film, but thanks to the authentic settings and characters, it has resulted in an ultimately cinematic work. The movie consists fully of single fixed-camera shots, which are meticulously composed with the frequent use of symmetry, and are cut with a basic fade-out/fade-in technique. And owing to the nature of the topic, this rigorous format receives an effective contrast in the content of each shot: shabby interiors with cracked walls, dirt-covered backyards full of discarded junk, dilapidated exteriors of wooden houses, a river overflowing with plastic bags and other rubbish, and the aforementioned industrial buildings.

Inside these shots, the protagonists go about their day-to-day activities, but as the film is billed as a docu-fiction, it is to be expected that some of the little stories that help the narrative move forward have been at least partly staged. However, the whole picture feels absolutely authentic, and it is very easy for the viewer to feel sympathy for the heroes. Pekarčík spent a long time among Roma communities both while working with other directors and during his preparations for this film, and this can be felt in the unguarded warmth of his approach.

Silent Days is a co-production between Slovak companies Partizanfilm and Kaleidoscope, and the Czech Republic's Školfilm, with the participation of Radio and Television of Slovakia.

Pavol Pekarčík has made what is so far the warmest Slovak docu-fiction drama about the Roma population, one of the staples of the country's modern cinema 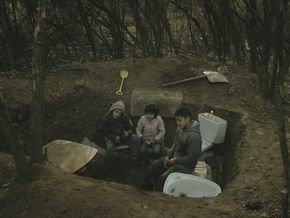 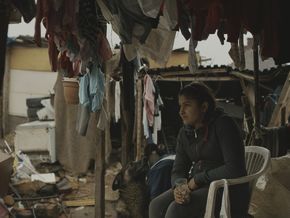