07/09/2019 - VENICE 2019: The debut film by Antoine de Bary is a charming, but slight, episodic tale that lampoons Vincent Lacoste’s man-child

Vincent Lacoste in My Days of Glory

My Days of Glory [+see also:
trailer
interview: Antoine de Bary
film profile], the debut film by writer-director Antoine de Bary, is a light-hearted affair inspired by the Italian comedies of the 1960s. It played in the Orizzonti section of the Venice Film Festival, ahead of its French release in January 2020.

It is the story of a former child acting star, who is now a man-child in his twenties and struggling to hold down acting jobs. Adrian is played by the charming Vincent Lacoste, who appeared in de Bary's short film Birth of a Leader, which was a hit in the Cannes Film Festival Critics’ Week in 2016. The central conceit of the short film – that of a young actor going through adolescent pains as he's cast to play Charles de Gaulle – is one of the story strands that prop up de Bary's rather slight first film. The helmer, rightly or wrongly, seems obsessed with the fact that the star of Amanda [+see also:
film review
trailer
interview: Mikhaël Hers
film profile] (2017) and On a Magical Night [+see also:
film review
trailer
interview: Christophe Honoré
film profile] (2019) bears a strong resemblance to the young de Gaulle.

The self-entitlement of Adrian is highlighted in the fun opening scene. The fire brigade is outside his Paris apartment, and rather than be worried, Adrian climbs up the fireman's ladder and into his flat through the window. It turns out he called the fire department himself, as he’d forgotten his keys at home. As Adrian celebrates being a smart-arse, the fire brigade issues him with a fine for wasting their time. The world will slap down Adrian’s tomfoolery at nearly every step.

At the police station, Adrian meets Léa (Noée Abita), a high-school student who he seems to be on a similar wavelength with, and he shares a cigarette with her. Life seems to take an upturn when he lands a role in a big movie for the first time in years, but it’s clear this won’t last long. A funny audition scene sees Adrian's imbecilic answers about who won World War II fit the director's vision of the character, and so he wins the part on account of everything but his acting talent. The third major strand concerns Adrian's uneven relationship with his parents, alcoholic Bertand (Christophe Lambert) and firm-but-fair Nathalie (Emmanuelle Devos). They both seem tired of their son and weary that Adrian has to move back in to live with them after his eviction.

There are plenty of fun moments, but the film seems dated, much like the jazz score. How many more movies do we need about young, middle-class men going through a crisis when they realise that you need substance to back up your self-entitlement? Even when the emphasis is on ridiculing such men, it still grates.

The three strands – romance, family and work – all have their moments, and the film is charming and humorous at times, but it’s also cloying and overwrought at other moments. The one high-quality consistent throughout is the performance by Lacoste, who is proving himself to be this generation's Louis Garrel. The on-set turmoil between Adrian, the director and a rival actor is a particularly weak component of the movie. The handling of the relationship with Léa is particularly sharp, especially when Adrian brings her back to the flat. Overall, there is more than enough to delight, indicating that de Bary will be worth looking out for in the future.

My Days of Glory is a French production staged by Iconoclast Films and co-produced by Tribus P Films. Its international sales have been entrusted to Bac Films.

more about: My Days of Glory

Interview: Antoine de Bary • Director of My Days of Glory

“If you don't get along with Adrian, you’ll leave the room after half an hour”

VENICE 2019: Cineuropa sat down with French director Antoine de Bary to talk about his debut feature, My Days of Glory, which premiered in Orizzonti and stars Vincent Lacoste 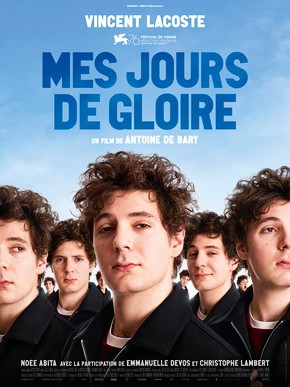 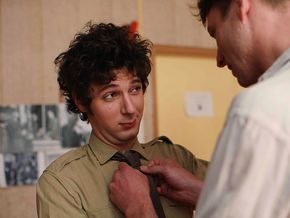 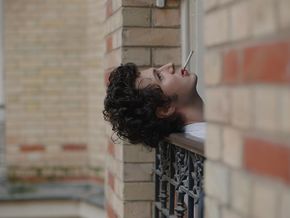