John Malkovich in The New Pope

Three years after Italian filmmaker Paolo Sorrentino came to the Venice Film Festival with his Emmy- and Golden Globe-nominated series The Young Pope, he’s back on the Lido, in an Out of Competition slot, with the follow-up series, The New Pope [+see also:
interview: Paolo Sorrentino
series profile]. Annoyingly, Sorrentino chose to show audiences episodes 2 and 7 of the series, with quick, tiny overviews plugging in some of the gaps and revealing a terrorism theme. Hopefully, showing episodes out of official order is not a trend that will continue.

Earlier this year, Danish filmmaker Nicolas Winding Refn arrived in Cannes with episodes 4 and 5 of his television show Too Old to Die Young. It seems pretentious for directors to come to film festivals to show off their wares out of chronological order. The obvious takeaway is that these directors are trying to highlight their auteur credentials at film festivals more than the shows themselves. The suggestion is that audiences should marvel at the cinematography, the aesthetic and the acting, and not worry about mundane things, such as the plot or the natural order of things. These filmmakers are wrong. Only by showing episodes in order can the series be adequately judged, and what was on show at the Venice Film Festival, for all its excellence, was pure window dressing.

The reason why Sorrentino showed episode 2 and then 7 is that they are the chapters that best showcase the considerable acting talents of John Malkovich and Jude Law. The American actor arrives in the show playing a British Pope, following on from a whole series where the British actor had an existential crisis about being named the first American Pope. Malkovich, who is currently on the London stage, can do British with his pants down around his ankles.

This season begins where the first season left off, with the collapse of Pius XIII (Law). He spends most of season 2 in a coma, but Law is far too well known to spend every episode lying in bed, so he gets to float around the Vatican as a ghostly presence. He seems more certain that God exists than he ever did when he was out of a coma. The allusion seems to be that he’s a modern-day Christ. We therefore presume that the first episode is a surreal and crazy comic caper portraying Rome in meltdown.

In the second episode, Secretary of State Voiello (Silvio Orlando) pushes for a moderate English aristocrat, Sir John Brannox (Malkovich), to be placed on the papal throne, adopting the name John Paul III. Malkovich, as his turn as Vicomte de Valmont in Dangerous Liaisons (1988) demonstrated, is a dab hand at playing characters with political ambitions that pretend they are innocent. And, of course, he’s magnificent in this, with his scenes opposite the returning Cécile de France, as Sofia Dubois, especially spine-tingling.

The tone of both episodes is far more melancholic than anything seen in season one. Both popes feel unhappy and burdened by the responsibility of their office. However, as with everything that Sorrentino does, the undercurrent of satire is also evident, and Law seems to be having much more fun with his character. It is likely that fans of The Young Pope will not be disappointed. Fans of not having plot spoilers revealed, on the other hand, were less enamoured with the “artistic” choice made at the Venice Film Festival.

The New Pope is an Italian-French-Spanish-US production staged by Wildside, in co-production with Haut et Court and Mediapro, and in association with Sky Italia, HBO and Canal+.

more about: The New Pope

“John Malkovich is the lay version of the Pope”

VENICE 2019: Paolo Sorrentino talks about returning to Rome, and Venice, for the second season of The Young Pope, which boasts a name change, The New Pope, and John Malkovich added to the cast

The new film by the director of Buried and Red Lights, recreating a real-life event filled with music, theatre, hope and suspense, is ready to go

Review: The Hand of God

VENICE 2021: “Amarcording” the Naples of his youth, Paolo Sorrentino gets to eat his Fellini cake and have his own, too

Based on the novel by German author Frank Schätzing, the eight-episode series will star Leonie Benesch, Cécile de France and Barbara Sukowa, among many others

Paolo Sorrentino directs The Hand of God for Netflix

Set in Naples, shooting is soon to begin on this film produced by The Apartment which promises to be intimate and personal 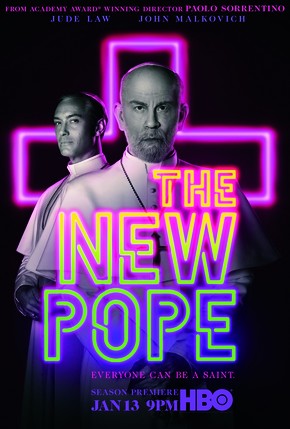