The opening scene of Rose Glass’s Saint Maud [+see also:
trailer
interview: Rose Glass
film profile] shows blood dripping, a hospital operation gone wrong and beetles scurrying along the ceiling. It's an unnerving start to a gripping watch. After that, the story follows a religious girl struggling with her existence. She hears the voice of God and believes that salvation is possible through helping others; perhaps that's why she became a nurse in the first place. In many ways, this is the perfect film to play Midnight Madness at the Toronto International Film Festival, before returning across the Atlantic to a Competition slot at the London Film Festival.

It's a film that wants to tackle big subjects, and no topic is safe from discussion. One of the first things that we learn about Maud is that she is on her period. Rising star Morfydd Clark delivers a remarkable performance as the eponymous character. Her Maud seems both vulnerable and capable of committing the most heinous of acts. Is she an angel or a devil? In her own mind, she's clearly the former: a recent convert to Christianity, she orders a Mary Magdalene necklace online. She talks to God, rather than writing Facebook posts. She's a woman, and this is a film, seemingly born in another era. The influence of Ingmar Bergman's Persona, with which it shares certain plot points, looms large. Maud is a nurse who takes a job looking after incapacitated choreographer Amanda (BAFTA and Tony Award winner Jennifer Ehle), who somewhat eerily lives in a house atop a Dublin hill. The set-up is complete: we have a nurse, a patient and a secluded home.

Amanda is an equally ambivalent character. She pays women and men for sex, almost believing that she can no longer be loved. Her illness has diminished her allure. Her incapacitated state is a source of frustration, but it also allows her to treat Maud disdainfully; her behaviour verges on bullying. She employs Maud, and so seems to think she has total power over her. Amanda is a great character because it's easy to feel sorry for her and not see her abusive flaws.

While much of the action takes place in the house, one of the critical moments in Saint Maud comes when Maud is in a pub. She cuts a lonely figure. She calls an acquaintance, who can't meet her. Maud's reaction is to search for human contact – any contact – and this makes her fall prey to chancers. Saint Maud is excellent in these moments when we get inside Maud's head and sense her rationale for self-destructive behaviour. Such elements also make Maud an unreliable narrator: is what we see real or a figment of her imagination?

Maud also casts judgement on Amanda, telling her friend and sexual partner Carol (Lily Fraser) not to see her again. Is Maud the abusive one? What is real? The questions are like being set an exam on Roman Polanski's Repulsion or Rosemary's Baby. An encounter with Joy (Lily Knight), who worked with Maud at the time of the opening scene, gives further food for thought. Writer-director Glass delivers on so many levels that it's hard to believe this is her debut. Saint Maud is an insight into a very modern, very lonely, existence that is sadly only too recognisable. The story haunts us long after the end credits roll, especially the two excellent performances from the leads.

Saint Maud is a UK production. It is a Film4 and BFI presentation of an Escape Plan Productions movie.

Cineuropa caught up with British helmer Rose Glass to talk about Saint Maud, her highly acclaimed debut film that has just screened at London

Sir Terry Pratchett’s Discworld novels to be adapted for television

Narrativia, the independent production company launched by Terry Pratchett in 2012, has signed a development deal with Motive Pictures and Endeavor Content to adapt the author’s literary saga 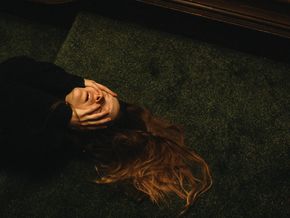