Review: This Is Not a Movie

Robert Fisk (right) in This Is Not a Movie

Robert Fisk is a British journalist celebrated for his dynamic reporting on the Middle East for the British newspaper The Independent. Yung Chang, the award-winning director of Up the Yangtze (2007) and China Heavyweight (2012), builds this documentary around a talking-head interview with Fisk. There is an intermingling of the journalist's words with archive footage of Fisk in war zones from Belfast to Syria and contemporary footage shot for the documentary. The result shows the meticulous way Fisk verifies stories, talking to those on the ground in an attempt to separate fact from fiction. This Is Not a Movie [+see also:
trailer
film profile] had its world premiere as part of TIFF Docs at the Toronto Film Festival.

Chang uses Fisk to weave a tale about the nature of modern journalism. For the director, Fisk is an example of how things should be done, a foreign correspondent on the ground reporting on a story by gathering first-hand evidence. Yet he is also becoming something of an anachronism in a world of cut budgets, quick news turnovers and digital reporting.

Fisk describes the disillusionment that made him stop working for The Times of London. After Australian business magnate Rupert Murdoch took over proprietorship, Fisk felt the headlines stopped reflecting what he had written in the article. Fisk moved to The Independent in 1989, remaining stationed in Beirut as their Middle East correspondent, where he has been working for more than four decades.

Surprisingly for one with such old-school methods, Fisk admits that he has grown quite enamoured of and accustomed to being published digitally. The film deals with his reaction to The Independent stopping its print edition and going digital in 2016. Despite a fondness for seeing the printed word, for Fisk, it's more important that when his article is published, it is read online by millions around the world within several hours. He is in a privileged position, as the digital move hasn't affected how the septuagenarian journalist works.

Another striking critique of the media made in the film is how quickly events are forgotten. Fisk voices the need to keep reminding audiences of what happened in the past, especially in a world of “fake news”. He talks about how the Armenian genocide is sometimes reported as the “alleged genocide” because Turkey disputes the accepted version of events. He sees this as a dangerous precedent, as the desire for balance is overriding fact. Fisk returns to the site of the 1982 Sabra and Shatila massacre, desperate to keep the memory of what happened alive. A conversation Fisk has on the phone with an editor in London shows the difficulties he faces when reporting on the Middle East, continually having to explain history.

As he has got older and worked for longer in the Middle East, he has come to understand that “neutrality” is in the eye of the beholder. It is as fascinating to watch Fisk talk about the media landscape as it is to read his inimitable writings on the Middle East.

Chang and editor Mike Munn (Stories We Tell) work hard to give the film a cinematic quality. It opens with Fisk running down the street in Abadan in 1980 and ending up in Homs in 2018, thus connecting two different wars and four decades in one sequence. The pace of the documentary is occasionally languid, but that comes with the territory, and the desire to be as thorough and factual as the subject. For anyone interested in a career in journalism, this is the movie.

This Is Not a Movie is a Canadian-German production staged by Sutor Kolonko Filmproduktion, the National Film Board of Canada (which also handles its international sales) and TINAM Inc.

more about: This Is Not a Movie

Review: This Is Not a Movie 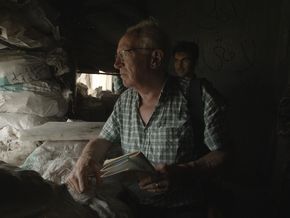