03/10/2019 - TV comedian Roberto Lipari makes his big screen debut in a well-executed comedy on the plague of favouritism in the university context, directed by Gianni Costantino

There are those who line the pockets of their professors with cash, those who turn up to their tests sporting generously low necklines and those who wash the cars of their university lecturers, all in an attempt to pass an exam. However, in Roberto’s case, his position as the dean’s son is enough to earn him top marks across the board throughout his university course. It’s within this Dantean circle of favouritism that we’re introduced to Tuttapposto, a comedy heralding the big screen debut of the young TV (and online) comedian Roberto Lipari - who also wrote the film alongside Ignazio Rosato and Paolo Pintacuda - and helmed by Gianni Costantino. It’s the filmmaker’s second film after Ravanello pallido and after spending a lengthy period of time working as an assistant director for the likes of Daniele Luchetti, Sergio Rubini, Ficarra and Picone, to name but a few.

In the University of Borbona Sicula, an imaginary Sicilian establishment and town, there reigns a most brazen form of nepotism: almost all the teaching staff have the same surname and exam questions are agreed upon in advance with friends and family members. Meanwhile, those with nothing to offer (whether money or sexual favours) are condemned to fall behind. Roberto (Lipari), “a born favourite” given that he’s the son of the shameless dean (played by a grotesque Luca Zingaretti) and, therefore, the prime target of all those students who are fighting for meritocracy, is all too happy to wallow in this system. That is, until he meets Irina, a beautiful Russian Erasmus student who hates string-pulling in all its forms, without exception. Out of love, Roberto tries to put himself on the other side of the divide; he distances himself from his father and all of his favours, and, penniless, he takes a job on an arancini stall, managed by Nuccio (Sergio Friscia), where Tripadvisor recommendations rule supreme (and woe betide those given a negative review).

This gives Roberto an idea: a mobile phone app which allows users to rate their lecturers - flipping power relations on their head and forcing teachers to behave responsibly - to be created under the watchful eye of the Education Minister (Monica Guerritore). But dishonesty tends to fester where we least expect it, and, following the app’s initial success, things look set to swing right back to where they were.

Based on personal experiences (one of the screenwriters was a university assistant), friends’ stories and news items, both past and present (not long after filming wrapped, news broke of exam rigging at the University of Catania), Tuttapposto joins the ranks of other intelligent comedies which shine a light on Italian malpractice whilst wringing bitter laughter from the audience, without forgetting to dial down the tone with more light-hearted, casual lines. The film boasts an excellent cast of Sicilian theatre actors (Maurizio Marchetti, Maurizio Bologna, Angelo Tosto, Gino Astorina and Barbara Gallo, brilliant in their roles as untouchable, arrogant “barons”), as well as Paolo Sassanelli (as the sex-addicted lecturer), Ninni Bruschetta (who far prefers table football over examinations) and the younger faces that are Francesco Russo, Carlo Calderone, Simona Di Bella and Viktoriya Pisotska who step into the shoes of Constantino’s revolutionary students and who are desperate to bring about change.

The younger generations have a lot to do, but it’s up to the older ones to help them: this is the message of the film. Meanwhile, for those who feel inspired, the smartphone app “Tuttapposto”, which was born out of the film, now really exists and can be downloaded free of charge.

Produced by Attilio De Razza on behalf of Tramp Limited, Tuttapposto will be distributed in Italy by Medusa Film as of Thursday 3 October, across 300 cinemas.

TV comedian Roberto Lipari makes his big screen debut in a well-executed comedy on the plague of favouritism in the university context, directed by Gianni Costantino 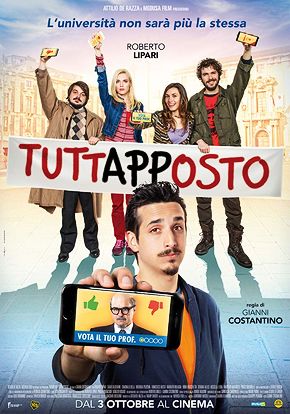 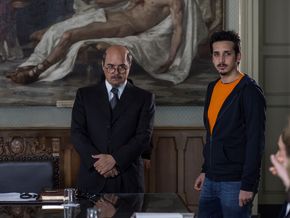 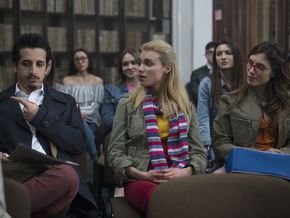