14/10/2019 - In the aftermath of the English Civil War, a devout Puritan family shelters a mysterious couple, in British auteur Thomas Clay’s third feature

Thomas Clay returns for his first feature in over a decade with the long-awaited Fanny Lye Deliver’d, a brutal thriller set in post-Civil War 17th-century England. After debuting his prior two films at Cannes, this one is having its world premiere in Official Competition at the London Film Festival. British thesps Maxine Peake (Peterloo [+see also:
film review
trailer
interview: Mike Leigh
film profile]) and Charles Dance (Game of Thrones, The Imitation Game [+see also:
film review
trailer
making of
film profile]) lead the cast, with newcomers Freddie Fox and Tanya Reynolds in supporting roles. More accessible than his past work, Fanny Lye finds Clay working with genre and beautifully rendering the England of four centuries past.

Like Yorgos Lanthimos’ The Favourite [+see also:
film review
trailer
film profile], Fanny Lye aims to unsettle our typical sense of British period films and realises there is more fun and insight to be gained from echoing contemporary fashions. A potent brew of sex, violence and political radicalism shown in a historical context seldom seen on screen, the film evokes the western and the melodrama, and employs tropes familiar from home-invasion horror films.

The year is 1657. Fanny and John Lye (played by Peake and Dance) live a modest existence with their young son on an isolated Shropshire farm. With John injured after his efforts fighting for the Parliamentarians in the Civil War, Fanny is responsible for most duties around the farm. It is a life of Puritan rectitude, with Dance impressive in his role as a domineering patriarch. Peake, by contrast, is a warm and benign presence, yet one which hides something fiercer in reserve.

Returning from church one morning, the couple is startled to find two stark naked runaways hiding in their barn. These are Thomas Ashbury (Fox) and his young ‘wife’ Rebecca Henshaw (Reynolds), who claim their clothes and belongings were stolen by highwaymen. Although deeply suspicious, John agrees to offer them shelter for the night — a stay soon prolonged, as the younger couple ingratiate themselves in the household. John, for instance, is appeased by Thomas’ claims that he fought on the same Roundhead side in the war. But this solidarity masks an even deeper radicalism: Thomas and Rebecca follow a self-made doctrine of sexual freedom and upended gender roles, proudly heretical to even the most reformist of Protestants. All the while, a cold-blooded sheriff and his deputy scour the land for these “blasphemers”, accusing them of “profane display”.

It's safe to say that Puritans and Ranters (the sect which the runaway couple belongs to) do not a happy 17th-century household make. The film then boldly breaks away from plausibility, inching towards the kind of speculative horror which recalls A Field in England or Witchfinder General. Akin to his previous work, Clay perhaps overly foregrounds provocation and shock value at the expense of structure, as a disturbing sex scene, bloodshed and the ripest 17th-century profanity ensue.

The ambition of Fanny Lye must be taken seriously. The 35mm print shown at the festival begins with a jokey homage to the old UK film censorship system - Clay gives himself a proud ‘X’ rating. This signals its debt to a fiercer strain of British cinema, that of Ken Russell and Peter Greenaway, as opposed to the genteel costume drama. Fanny Lye is a well-made, gripping film, with a principled sense of wanting to explore British history, at a time where its present is facing similarly grave divisions.

Fanny Lye Deliver’d is a UK-German production by Pull Back Camera and co-produced by Essential Filmproduktion. It was made with the support of the BFI, Creative England, Film- und Medien Stiftung NRW, Medienboard Berlin-Brandenburg and ZDF. Coproduction Office handles international sales. 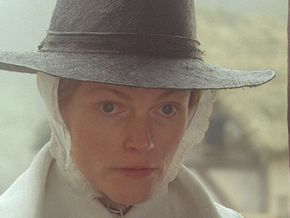