15/10/2019 - Chiara Viale's debut feature is an enjoyable film, the strongest assets of which are its script and the four lead characters' performances

The second world premiere at the seventh IndieCork Film Festival was that of Italian writer-director Chiara Viale's debut feature, entitled The New Music [+see also:
trailer
interview: Chiara Viale
film profile]. The project, which entered production in 2017 and was partly financed by a crowdfunding campaign, follows her first shorts Be Frank (2017) and Clown (2018).

The film revolves around Adrian (Cilléin McEvoy), a twenty-something Irish pianist with a promising career, whose life falls apart when he is diagnosed with Young-onset Parkinson's Disease. Afraid of the implications of his debilitating condition, the musician runs away from his mother Kathleen (Paula McGlinchey) and moves to Dublin. There, he shares an apartment with three friends who play together in a punk band – namely, Jodie (Martina Babišová), Will (Jack Fenton) and David (Patrick O'Brien). The opening sequence brings the viewer directly to the story's main conflict, as we see a few shots showing the band rehearsing their songs and others with Adrian standing next to a piano and pensively touching his hands.

After some initial diffidence, Adrian bonds with Jodie, Will and David. Gradually, he becomes fascinated with their easy-going lifestyle and the music they play. The four actors do a great job together and allow the viewer to slowly empathise with them. Adrian's inner struggles, Jodie's caring attitude as well as Will and David's upbeat – and, at times, slightly surreal – wit are plain to see on screen and very compelling. Later in the movie, Adrian is forced to confess that he has Parkinson's, so the three invite him to join their band. The young pianist is reluctant, but he soon realises that it may be a wonderful opportunity to keep playing and expressing his musical talents. In this work, Viale shows off some solid screenwriting skills, too: the dialogue sparkles, and Adrian's narrative arc, while rather simple, is convincing.

In general, the film could have benefited from more refined editing and camera work: in particular, some cuts and transitions are a tad rough and could have been smoother. Moreover, the overabundance of establishing shots in between scenes does not help in this sense. Luckily enough, these hiccups do not significantly affect the quality of the narration, but a little more attention to detail would certainly have improved the final result.

On a more positive note, David Sangster's score is really enjoyable, and this is obviously of paramount importance for a film where the healing power of music is a central element of the plot.

In conclusion, Chiara Viale's debut feature is a brave work, a little independent film with a big heart. Now it is time to see what the Imperia-born director can do with a bigger budget.

The New Music was produced by the director herself and Philip Kidd, in association with Young Parkinson's Ireland. The movie's UK distributor is 101 Films, while its sales agent is Silver Mountain Distribution.

more about: The New Music

We interviewed the Italian director to discuss her debut feature, which is released in Ireland and the UK on 18 January via Amazon Prime Video, iTunes and Sky Store

Chiara Viale's debut feature is an enjoyable film, the strongest assets of which are its script and the four lead characters' performances 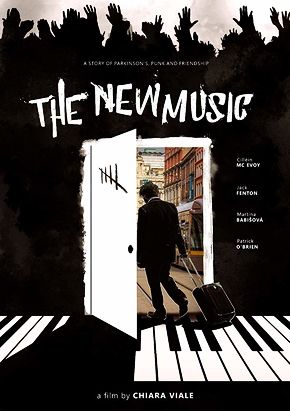