In Cristina Comencini’s new feature film Tornare [+see also:
trailer
film profile], the main character makes a return on both a physical and a psychological level. But this work which closed the 14th Rome Film Fest also marks Giovanna Mezzogiorno’s return - fourteen years after her appearance in the Oscar nominated film Don’t Tell [+see also:
trailer
film profile] - to a set helmed by the Roman director and daughter of the great Luigi Comencini, and to the world of the subconscious and all its repressed traumas. It’s a tale in the form of a thriller, where the past and the present intermingle and where linear time is non-existent, simply serving to measure change.

The film’s protagonist, Alice, is literally split in three, with her forty-something self played by Mezzogiorno, her teenage self played by the revelation that is Beatrice Grannò and her child self played by Clelia Rossi Marcelli. We’re in Naples in the 1990s and these three Alices begin to communicate metaphorically (and otherwise) with one another in the family’s old and now uninhabited seaside home, to which adult Alice is returning upon her father’s death, following many years of absence. Here, she finds her sister Virginia (Barbara Ronchi) and the two of them decide to sell the house, emptying it of all their memories. She also makes the acquaintance of a mysterious man, Marc (Vincenzo Amato), who took care of their sick father in his final days.

This man, whom initially Alice doesn’t seem to remember anything about, will be the one to help her piece together a tragic event which had a determining effect on her life. At the end of the 1960s, Alice was a beautiful, rebellious teenager who lived and breathed the emancipatory air of the epoch, hungry for freedom and fun. Her attitude and her passion for life and for flirting with everyone who crossed her path, was readily confused with looseness in the repressive society of the time, not helped by the fact that she was also the daughter of a US Navy sailor. There would be consequences for her “difference”, and these are gradually revealed to us by the film, during a painful journey through Alice’s memories.

Present-day Alice is a very different woman from the one she once was and seems to harbour a sense of guilt over her formerly bold and carefree self. Mezzogiorno plays a woman in pain, a (perhaps overly) submissive and “punished” character who’s unrecognisable from the girl in the 1960s who danced the sirtaki in her swimsuit. Mention has to be made of the extraordinary physical resemblance of the actresses who play the three ages of the protagonist’s life (casting comes courtesy of Laura Muccino and Sara Casani), not to mention the highly convincing three versions of Marc, who is played as a youngster by Marco Valerio Montesano and as a 10-year-old by Alessandro Acampora.

The film’s theme is universal and, as such, it can’t help but leave a mark on the viewer. The ability to meet up with our teenage and child selves and to take them by the hand, armed with the knowledge that we possess today as adults, would indeed be a phenomenal gift. Comencini has confessed that this work - which is based upon the story of a friend - is her “most free-spirited film”, one which digs down deep “into an inner world where there’s no such thing as time”, and, ultimately, this premise serves to muddle things a little too much. The story is, however, set in a troubling yet beautiful Naples, a world away from the usual clichés, with its exploration of unusually quiet locations and subterranean caves. It might not be an easy film, but it’s captivating, nonetheless.

Tornare is produced by Lumière & Co. alongside Rai Cinema. Distribution is in the hands of Vision Distribution. 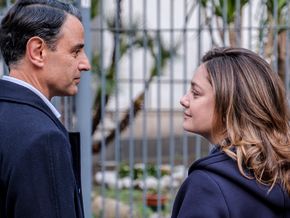 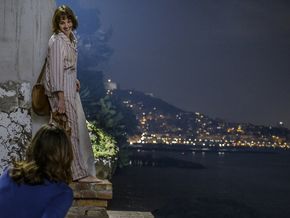