In search of the raw materials from which to craft his directorial feature debut, British filmmaker of New Zealand heritage Henry Blake decided to draw on the experiences he has been accumulating over the years during his work with young people in dangerous situations, a labour of love that he continues to this day. It is evident that Blake knows the topic like the back of his hand, as nothing seems fake or staged in County Lines [+see also:
trailer
film profile], the international premiere of which (following its world premiere at the BFI London Film Festival) was hosted by The New Waves section of the 16th Seville European Film Festival this week.

As the film begins, we collide head-on with Tyler (played by Conrad Khan, whose performance cannot be praised highly enough), a teenager seemingly with few friends. A woman whom we hear but cannot see is explaining to him that, in the line of business he has been involved in lately, nobody gives the slightest toss about what might happen to him. Next, the film travels back in time to recount what exactly brought the kid to this situation in the first place. We see that Tyler is a normal young man from your average working-class English neighbourhood. He lives with his mother (played brilliantly by Ashley Madekwe) and his little sister (the young and surprisingly charismatic Tabitha Milne-Price) in a modest flat and attends a secondary school where things are not going quite as swimmingly as they should be.

The protagonist’s situation is fairly complicated, to say the least, as he is surrounded by violence and is unable to see even a glint of light at the end of the tunnel. That’s when Simon (a convincing Harris Dickinson) appears on the scene, a local gangster in search of youngsters to serve as mules for the drug-smuggling operations he masterminds. That’s when Tyler’s downward spiral really begins, and Blake depicts it without skimping on the details, but always managing to steer clear of cheap sensationalism and manipulative schmaltz. What’s more, he stages it all with frankness, sensitivity, and complete and utter respect for his characters, which leaves us no choice but to immerse ourselves fully in what we are seeing, allowing ourselves to be hooked by the story and the human beings at the heart of it.

It’s practically impossible to find any flaws in this work. The settings that the characters wander through strike us as so realistic that it’s enough to make us shudder, the dim lighting (courtesy of Sverre Sørdal) that gently illuminates each and every shot successfully creates an oppressive atmosphere that leaves us gasping for air, and the subtle and clever use of music (entrusted to James Pickering) serves to ramp up the emotion during the most intense moments of the movie. It’s a real delight to discover the talent of a new filmmaker whose work oozes honesty and commitment, and it is easy to see the relationship between this and the British social-realist film tradition epitomised by Ken Loach. Having said that, Blake clearly shows that he has his own gaze and an original way of telling a story, which allows him to stand out without the need to resort to comparisons and which also compels us to keep a close eye on his next steps as a filmmaker.

County Lines is a production by Two Birds Entertainment and Loupe Films, in conjunction with Belga Productions. 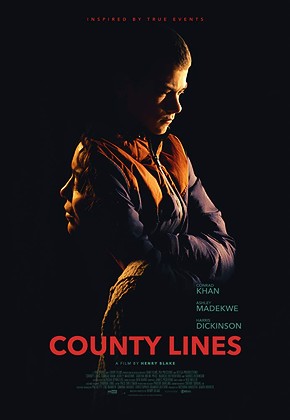 The French helmer goes back in time by reflecting on her youth, more than a decade after her first autobiographical film Stella

Elwira Niewiera and Piotr Rosołowski • Directors of The Hamlet Syndrome

The established Polish documentary directors discuss their new film shot in Ukraine, which shows how theatre and film can assist in dealing with traumatic events

Nikolaus Geyrhalter • Director of Matter Out of Place