One could call him a regular at the International Documentary Film Festival Amsterdam (IDFA), as most of Iranian director and producer Mehrdad Oskouei’s films have been screened at the festival. His short My Mother's Home, Lagoon, was his first to be programmed in 2000, and now his latest feature-length documentary, Sunless Shadows [+see also:
trailer
film profile], has opened the festival’s 32nd edition. The film, which also runs in the main competition, shows life inside a juvenile detention centre in Iran, in which the director follows a group of young girls who are being detained for murdering a male relative. Their openness in speaking about their actions is thrilling from beginning to end.

The film juxtaposes spontaneous, observational scenes in the facility with controlled interviews in which the girls are asked to speak to the camera as though it was their mother or to their victim, which often is either the father or the brother of the detainee. The footage is then actually shown to their mothers, some of them guilty of murder as well and awaiting their death penalty. It makes for an intensely personal and emotional dialogue, in which the powerful themes of hopelessness and lack of control come bubbling to surface. Their motivations for the crimes they committed are easy to understand, as the stories of the abuse that those criminals suffered at the hands of their victims are the worst in their kind. Still, the aftermath is devastating in itself. The film shows the disturbed nature of some of these mother-daughter relationships, where roles sometimes seem reversed: one of the daughters feels that she is the caregiver instead of her mother. In one scene, she catches a pigeon then sets it free in the yard, throwing it up in the air, and we can almost hear her longing for the same freedom.

The contrast between those testimonies and the film’s more observational scenes is remarkable, as the latter carry an unexpected lightheartedness. If we didn't know the stories of these women, their situation could easily be mistaken for a girls’ summer camp of sorts. They are seen playing games in their room, smiling and giggling. During a session of charades, the group has to guess the name of an American celebrity. “Jennifer Lopez,” one shouts, “Trump, Trump,” another yells, with lots of excitement. The scene lets us momentarily forget their harrowing situation, but the undercurrent of their grim story remains. It becomes clear that this is a world in which men run the game, and it seems as though the girls that are willing to fight back are better off inside the facility than out because that is where the brothers and uncles — the accusers — are. Subtle shots of armed guards reflected in a window remind us of their imprisonment. Or could it be some kind of protection, in a sense? Their relationship to men is a powerful topic for the girls themselves, and the film shows fiery discussions among the group. They argue about how a man should behave towards a woman, and the distorted views they have acquired are exposed, as well as their trauma. Given that the filmmaker himself is a man, the amount of trust they have given him is simply admirable, and makes for an emotional and moving portrait.

The non-fiction film festival’s tenth edition will take place online this year, running from 9 to 15 September

Acasă - My Home triumphs at Krakow

Other winners of the 60th edition of the Polish festival include Sunless Shadows, The Whale from Lorino and Self Portrait

In a Whisper crowned Best Feature-length Documentary at IDFA

Other winners were the Iranian-Norwegian co-production Sunless Shadows and the Dutch movie Punks, among others 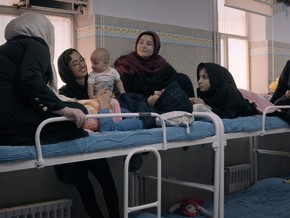 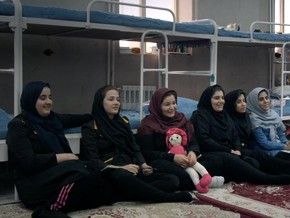