27/11/2019 - In Jørgen Leth’s latest feature-length documentary, he examines his own vulnerability after experiencing a traumatic event

The opening sequence of Jørgen Leth’s autobiographical documentary shows the director lying inside an MRI machine. In stylised, sterile, white surroundings, he presents the problems that will drive this experimental investigation forward. It marks the start of a thorough case study: a metaphorical scan of his psyche, in which the ego is forced to bear the physical discomfort of ageing. I Walk [+see also:
trailer
interview: Jørgen Leth
film profile] is a critical self-examination by the acclaimed experimental filmmaker and poet. The feature-length documentary world-premiered at the 32nd International Documentary Film Festival Amsterdam (IDFA) and is taking part in the main competition.

After massive earthquakes struck Haiti in 2010, Leth, who had been residing in the country for long periods of time, was confronted with his own mortality. He hasn’t been able to walk normally ever since. Finding it difficult to accept, he decides to somehow find coherence in this process. His feet, his legs, his hearing: nothing works the way it used to. “I have to remind myself to lift my feet when I walk,” Leth mockingly tells himself. The tension lies in the fact that his mind still has plenty of creative drive: a drive he has been able to keep up with during his career, but he is now being held back by his physical condition. It lays bare his ego, as he is not able to present himself to the outside world as he would like to.

Ultimately, it leads him into a maze of fascination with himself, spiralling into an internal conflict that takes shape as a mashup of images, memories and quotes encompassing the past and the present. We feverishly speed through images of his work as a sports commentator, his time in Haiti and his latest undertaking: an art project in the jungles of Laos. They are sequences in which it’s difficult for the viewer to keep a grip on proceedings, ultimately allowing them to relate to how Leth feels as the protagonist in his own story.

The director’s experimental approach in I Walk undoubtedly fits in with his oeuvre, as it is characterised by very subjective examinations of life, resembling earlier works such as The Perfect Human, for example. I Walk is the quintessence of his personal style of filmmaking, as he documents everything he is going through using his iPhone. He is in search of the meaning behind his experiences and therefore has to film everything. It could all potentially be relevant and so has to be thoroughly examined.

The imagery Leth uses to reflect the chaos he finds himself in is the jungle. There is no order or obvious definition to be seen. This formal approach takes shape in the story, as he, in an effort to get a grip, hires a group of Laotian carpenters to help him. Together, they create a frame in which to place “his” piece of jungle in order to control it – a bright-red, wooden square that they mount in the canopy. All the while, it feels like an absurd undertaking, lacking a raison d’être. And as if replying to our thoughts, Leth starts to exclaim that he now sees why it is there – he sees the frame, though he is probably talking about the frame of his own life. A top shot shows the treetops, encompassing a diverse world of organisms, a system in itself. And indeed, a few of these are framed by his red square, in a final attempt to restrain the chaos. Letting go is the only way, it seems.

I Walk was produced by Sigrid Jonsson Dyekjær for Danish Documentary.

more about: I Walk

“This whole story was an extension of my personal process”

We chatted to experimental filmmaker and poet Jørgen Leth about his highly personal, IDFA-screened documentary I Walk

In a Whisper crowned Best Feature-length Documentary at IDFA

Other winners were the Iranian-Norwegian co-production Sunless Shadows and the Dutch movie Punks, among others

In Jørgen Leth’s latest feature-length documentary, he examines his own vulnerability after experiencing a traumatic event 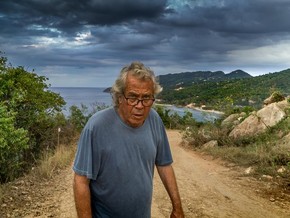 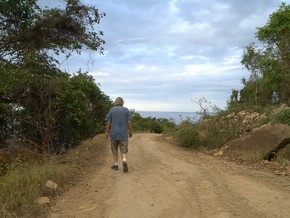