30/12/2019 - In his gentle documentary, Pedro Filipe Marques explains where footballers come from

If it takes a village to raise a child then it must be the same with future football stars, is what Pedro Filipe Marques seems to be pondering in his documentary Breeding Ground [+see also:
trailer
film profile], already crowned Best Portuguese Competition Film at this year’s edition of the Doclisboa International Film Festival. Taking his eyes off the field (quite literally, as you barely see anyone, but only hear them once in a while) and fixing them onto all the usually invisible people who sweep the grass that footballers run on, fold their socks or clean the seats that their parents proudly fill out during the games, all this while usually telling stories nobody is listening to. They also look for the socks, dry them or try to figure out which one of the little troublemakers forgot them in a rush – in all likelihood, nobody will see that many socks again in another film, ever. “So many socks!” an equipment managers understandably sighs at one point. You. Have. No. Idea.

But sock-related jokes aside, the way the film actually becomes quite involving by the end is nothing short of miraculous. Marques captures the small, run-down world of the Arcozelo football field rather well and, in no time, eavesdropping on all the gossip proves almost soothing, with death and inconceivable pain making their way into conversations as casually as some muttered complaints. Kids come and go, always loud and never paying any attention, but these older people stay right where they are. They have work to do, loads of it in fact, so better make yourself scarce and keep on walking.

Sticking to unobtrusive observation, Breeding Ground is hardly ground-breaking in its approach, but mostly comes off as incredibly tender – especially in its portrayal of the ones holding this small fort together. Despite an occasional comment that “life is hard”, which is easy to believe, they don’t seem bitter not to be the ones waiting for future glory – or any future at all, for that matter. Rather, they know every child’s name by heart — a lonely girl is seen rummaging around there, too — cheer on them when they deserve it or judge their daily performance like their lives depend on it. All of this, only to then get up, fix their apron and return to their lifetime of repetitive tasks, of sweeping seats and folding clothes, a routine which Marques shows in every possible detail. The film eventually comes to a very simple, if rather heart-breaking conclusion: though you can dream big in life just like the American movies teach you, someone else will still need to clean up your mess.

In his gentle documentary, Pedro Filipe Marques explains where footballers come from

The Portuguese event will showcase 303 films from 48 countries across its 11 sections, and feature a rich industry section with numerous projects at various stages of development 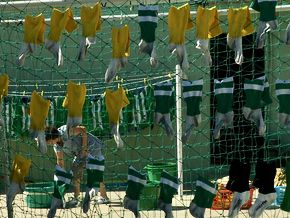