While Safety123 – shown at DOK Leipzig in the Next Masters Competition and ultimately awarded with a Golden Dove – does not bring anything new to the table as far as observational documentary is concerned, a sense of discovery can still be taken away from Julia Gutweniger and Florian Kofler’s latest, slow-paced collaboration. It is present in the origins of the film: apparently inspired by the odd-looking walls in the Alpine area that the two directors one day came across (true story), they decided to take a closer look at this entire system designed to, well, keep the capricious nature at bay, or simply beef up one’s chances against its many surprises.

This infrastructure is still rather mysterious, as nobody ever thinks about it if they can avoid it, or at least not until something suddenly goes horribly wrong: be it an avalanche, a landslide or a truly dramatic snowfall. In a way, this little, commentary-free film celebrates people’s inability to give up, as far as survival is concerned – with everyone here dedicating hours to anticipating the future, crunching numbers, performing tests and trying to be prepared, and failing that, at least going to sleep knowing they did their best. Indeed, despite all the new technologies and effort involved, this kind of work still seems never-ending – a bit like the struggles of Sisyphus or some other poor mythical fella, with the entire existence depending on the whim of a cruel deity.

There is some interesting sound work here, too, which makes it difficult to pinpoint the exact feeling Gutweniger and Kofler are going for, and while the subject is hardly laughable, they do have a sense of humour as well. They seem genuinely fascinated by the subject, as well as by the people trying to literally harness the mountains but realising there is only so much they can do. There is no denying that their interest will be shared by a limited audience since, to put it bluntly, watching rocks fall under a certain angle can only be engaging to a certain extent. But there are moments that hit right where they should, like the scenes showing a couple learn how to properly deliver the worst of news to grieving families, or a local community praying for safety while consecrating a brand new retention basin, asking the One Above to “protect their land from flooding and storms.” They know perfectly well that, in the end, their prayer might be just as useful as any artificial pond ever will, as though we can be prepared all we want, in the time of true need, we are rarely ready.

Co-production between Italy and Austria and directed by Julia Gutweniger and Florian Kofler, Safety123 was produced by the directors for Villa Mondeo.

In Julia Gutweniger and Florian Kofler’s film, it’s better to be safe than sorry

DOK Leipzig to open with Marcus Vetter's The Forum

The official selection of the 62nd edition features 161 films, including 63 world, 27 international, 12 European and 50 German premieres 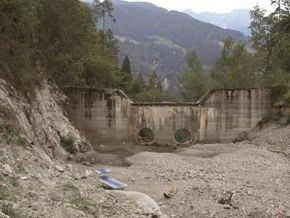