After the release of Love 1: Dog [+see also:
film review
trailer
interview: Florin Şerban
film profile], we labelled Florin Şerban “Romania’s most romantic director”. He wins new brownie points in this respect with the second part of his “Love Trilogy”, Love 2. America, but unfortunately, the film – which was released last Friday in a few Romanian cities – feels surprisingly cold when one considers its purpose, premise and the tools at its disposal.

Written and edited by Şerban, Love 2. America explores the last day in the love story of a man (Igor Babiac) and a woman (Emõke Pál). He is ready to leave the next day to forge a new life for himself in America, and she comes to say goodbye. Cryptic conversations, an atemporal setting (the story may be set in pretty much any decade of the previous century) and the location (a small house in the middle of a forest) quickly reveal the goal of this small, beautifully shot (thanks to Oleg Mutu) feature: to explore and approximate the essence of love. It is a very ambitious purpose, and unfortunately, pretty much everything that happens in the movie seems to be working against it.

Of course, beauty (in this case love) may very well be in the eye (in this case heart) of the beholder, and some viewers may find the protagonists’ highly choreographed antics on the screen quite romantic. Nevertheless, they – together with the lines brimming with pathos – did not work for the author of this review, who couldn’t stop asking himself how it was possible that one of the most natural and expressive actors working in Romanian and Moldovan cinema today (read our reviews of Babiac’s previous features The Unsaved [+see also:
film review
trailer
film profile] and What a Wonderful World [+see also:
film review
trailer
film profile], for example) can look so artificial in a love story.

Although Oleg Mutu’s camerawork takes advantage of the beauty of the pristine forest and the house seemingly abandoned and lost in time, the camera is usually so far from the protagonists that the emotion and dramatism are lost, while the conversations in voice-over discussing how a lover is the supreme being in the life of his or her beloved, St Augustine quotes and so on, may make the audience feel that the image is rather secondary in this cinematic contraption and its de-fragmented chronology. In America, it is as if the image is being used to form a hermetic box in which someone forgot some cutesy quotes on big topics written by unknown, rather insipid authors.

Yes, Şerban deserves praise for trying to go in directions that Romanian cinema usually steers clear of, but unfortunately this is not enough. The director succeeded in conveying the ideas of attraction, obsession and loss much better in his previous, Sarajevo-selected feature Love 1: Dog, where things worked simply because the characters played beautifully by Valeriu Andriuţă and Cosmina Stratan didn’t stop every minute to talk about attraction, obsession and loss. Watching America, one may realise that cinematic love doesn’t appear out of thin air, and pretentious, monotonous and seemingly overly rehearsed conversations are maybe the least efficient way to conjure it up before the audience.

Love 2. America was produced by Romanian production companies Fantascope Films, The East Company and Correct Media. The film was released domestically on 10 January by Fantascope Films. 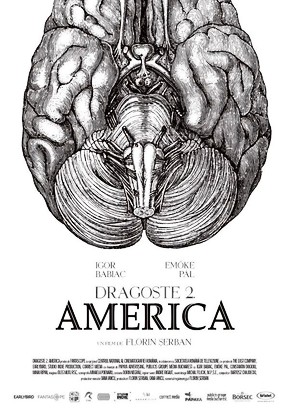