The Enache family in Acasă - My Home

Romanian director Radu Ciorniciuc’s debut documentary, Acasă - My Home [+see also:
trailer
interview: Radu Ciorniciuc
film profile], shown in the World Cinema Documentary Competition at the Sundance Film Festival (23 January–2 February) provides access to Europe’s biggest urban delta, the Văcăreşti Nature Park in Bucharest, as seen through the eyes of a Gypsy family living in a shack in the middle of the wetlands. Heart-breaking and relevant, the documentary challenges our preconceptions regarding the ideas of home, family and happiness.

We meet the Enaches, Gică and Niculina, who live together with their nine children (all minors) in a shack with no electricity or running water. Ciorniciuc has extraordinary access to the heart of the family, as we see them surrounded by pigeons, dogs, cats and the occasional pig. The kids, led by the eldest son, Vali, have a whale of a time scavenging for food, fishing in the delta or catching birds, in shots that bring to mind those adventure movies about families of explorers settling in the wilderness centuries ago. But soon, reality starts to invade this paradise: the young Enaches are condemned to a future of poverty and illiteracy, and that future comes knocking.

Although one may assume that Ciorniciuc and screenwriter Lina Vdovîi got involved in the wellbeing of the family more than we see on the big screen, the documentary is entirely observational, the camera (Mircea Topoleanu and Ciorniciuc) unobtrusively watching the family casually explore their shortcomings and difficulties. The audience has many occasions to contemplate their own ideas about home and happiness when the Enaches are uprooted from the wilderness and forced to live in an apartment in Bucharest. Is happiness a roof that does not leak during a storm? Or a cooking device that heats food at the turn of a dial? No, it’s not... And while the viewers meditate on the things they take for granted in their lives, they may also be amazed at how little others need to be happy and how easily paradise can be lost.

The documentary challenges the audience to adopt a position: what would one do with the family’s children? Of course, many would talk about education, integration and a better future, and indeed, this would be the normal (if this word still means anything today) reaction in this context. But Acasă also implies that the system accepts only those who are already integrated, burdening those who are not with incomprehensible rules and seemingly unnatural expectations, only to reject them at the first opportunity.

It takes an incredible amount of flexibility and goodwill to comply with such expectations, especially when the family is led by a father riddled with contradictions, as he brags about his education but throws his children’s books on the fire or validates himself by saying he was a state employee, but discourages his eldest when the teenager could have a shot at a stable job. He is the true villain in this complicated story, the origin of the family’s troubles, an obstinate naysayer spreading the difficult legacy of ignorance and trauma.

Acasă is hard to watch because it forces us to accept the incredible advantage we had when we started our own journey in life: supportive families, cosy homes, a stable income, access to education, and an ingrained genetic memory of what is expected from us in order to gain acceptance. We were no better than the young Enaches; we were just luckier. And the saddest thing is that even if they do comply, giving up their way of life and even themselves in order to be accepted, chances are they will always be seen as intruders, lesser citizens whom society only tolerates. The film’s last shot, with Vali doing his rounds as a ranger in the park that used to be his realm only a few years ago, is not an image of success: something has definitely been lost, and it’s not very clear what has been gained.

Acasă - My Home was produced by Manifest Film (Romania), and co-produced by Corso Film (Germany), Kinocompany (Finland) and HBO Europe. The film will be released domestically in September.

more about: Acasă - My Home

"Art is one of the ways we can humanise the true savages of our time: ourselves"

We caught up with Romanian filmmaker Radu Ciorniciuc to discuss Acasă – My Home, his documentary focusing on a family forced out of the wilderness of the Bucharest urban delta

Here, the Silence Is Heard, TATA and The Wife Of among the (Egg)celerator Lab grantees

The lab, an initiative of Chicken & Egg Pictures, has awarded a number of feature-length documentary projects from around the world

Legacy, Acasă – My Home and 5 Minutes Too Late were also among the gala’s winners

Celebrating its tenth anniversary, the international rough-cut training programme for documentary filmmakers will introduce the eight projects that took part in the 2020 edition 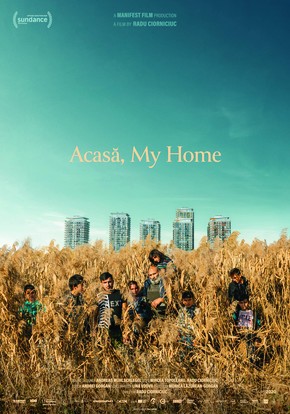