Review: The Average Color of the Universe

Jennie Silfverhjelm in The Average Color of the Universe

Virtually a cinematic poem, The Average Color of the Universe plays out in seven stanza-like chapters, each representing one of the seven basic colours of the spectrum. Voice-overs from documentaries about physics and astronomy are intercut throughout, sometimes heard from an on-screen television set, sometimes seemingly coming from above and/or beyond.

The main protagonist is a young woman (Jennie Silfverhjelm, given and mastering a difficult task), spending her time at what looks like a summer house in the countryside or perhaps on an archipelago. Clearly unnerved, she’s seen attempting to inseminate herself with frozen sperm, moving into self-pleasure and then tears of frustration. Images of a somewhat pain-stricken man, a cheerful infant toddler and doctors performing delicate surgery at an operating table also permeate the feature. As the chapters play out, it is clear that many of the images represent the remembered, the dreamed or the imagined – all in one prismatic blend, if you will. But the woman in the house is real, and is all by herself, as the others are now gone.

The Average Color of the Universe is a courageous creation, addressing loss and trauma in a deeply personal manner, wherein certain components may be coherent primarily to the creator herself (or at least will necessitate several viewings). That said, this is a film that probably looks like and says just what it’s supposed to, enigmatically displaying its coded colour scheme (not in the original order of the spectrum, at that) for the spectator (and surely also the protagonist) to try to untangle. Two brief dialogue scenes occur, presumably to provide enlightenment; at least one of them actually feels a bit redundant. The actual name of the titular average colour of the universe is both ingenious and delicious: cosmic latte.

The Average Color of the Universe was produced by Swedish outfit Sheakartellen and co-produced by fellow Swedish firm Kärnfilm. TriArt Film AB is in charge of its national distribution.

more about: The Average Color of the Universe

Interview: Alexandra-Therese Keining • Director of The Average Color of the Universe

“My films seem to grow quieter each time”

Review: The Average Color of the Universe 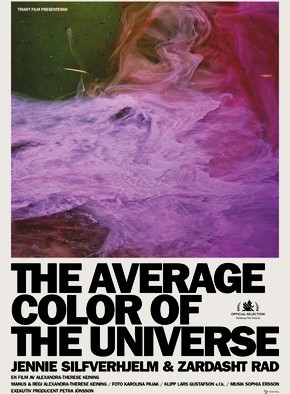 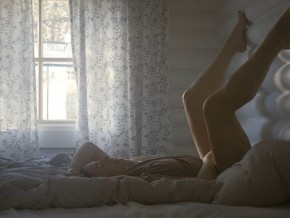