Review: Guests in the Villa

30/01/2020 - Ivano De Matteo’s latest film poses yet another ethical dilemma, asking where we draw the line with self-defence

Cristina Flutur in Guests in the Villa

Ivano De Matteo is back, and is once again asking himself and the viewer: “what would you do if you were them?” in his latest film, Guests in the Villa [+see also:
trailer
making of
film profile], the crux of which is yet again a terrifying ethical dilemma. Just like in The Dinner [+see also:
film review
trailer
interview: Ivano De Matteo
film profile] and Beautiful People [+see also:
film review
trailer
film profile], we are faced with a hypocritical middle-class family who are prepared to carry out the most unthinkable acts in order to defend what they have: money, a tranquil life and respectability. In this his sixth feature film, written in league with close friend Valentina Ferlan, De Matteo probes the limits and the ambiguity surrounding self-defence, crafting an incredibly interesting work that’s also highly topical, given the subject-matter it covers (the use of weapons in self-defence has been at the heart of Italian political debate for some time, following a sensational news story), despite its somewhat erratic tone.

Unfolding within the space of 24 hours, the film is essentially divided into two parts: in the first, we’re introduced to all the characters. It’s daytime and we’re in a small town in the wealthy North-East where the very willing Diletta (Michela Cescon) is organising a charity event with the help of the handsome parish priest (Vinicio Marchioni), while her husband Giorgio (Marco Giallini) is preparing to leave on a work trip (which turns out to be nothing of the kind) and her self-indulgent teenage daughter Beatrice (Monica Billiani) insists on making her life a misery. Meanwhile, in the house of Diletta’s scathing mother (Erica Blanc) is a Romanian housekeeper called Sonja (Cristina Flutur, crowned Best Actress in Cannes 2012 for Beyond the Hills [+see also:
film review
trailer
interview: Cosmina Stratan
interview: Cristian Mungiu
interview: Cristian Mungiu
interview: Cristian Mungiu
film profile]), who also has a restless teenager for a child, Adrian (Ioan Tiberiu Dobrica), and who is conducting a secret relationship with the local police commissioner (Massimiliano Gallo). Completing the picture is the village doctor (Bebo Storti), whose loyalty is easily acquired by way of trips and spa visits.

Each of these individuals keeps up appearances, but a few subtle signs (a fleeting look, for example) reveal the clandestine links between these characters, and the vices hiding behind so many virtues. In the late afternoon, the sunshine gives way to a violent storm, which, metaphorically, seems to sweep away conventions. Thus begins the film’s second half, heralding the change from an appearance-based comedy to a film noir, set entirely in the sumptuous, multi-level villa belonging to Diletta and Giorgio. It’s night-time and someone slips into the house; frightened and under the influence of medication, Diletta grabs the gun and shoots.

What happens next is a veritable, theatrical and, at times, slightly artificial huis clos, where all the characters from the first part of the film converge, gathered together in the villa in order to find a solution to the very serious situation before them: on the ground, lies a boy nearing the end of his life, a boy who is known to everyone in the town and who had no intention of burgling them. Each of these characters has some kind of involvement in the affair, in a chain of responsibility which began with an illegally owned gun. On one side of the scales, there’s the immunity and reputation of the town’s notable folk; on the other, the fate of a poor immigrant family whom nobody has the slightest interest in. Each of them will reveal the very worst sides of themselves, all of them complicit, none of them innocent. And, true to the laws of nature - evoked at various points throughout the film by way of images of woodland animals, acting as intervals in the story - the weakest among them will inevitably succumb.

Guests in the Villa is released in 50 copies, today, 30 January, via Academy Two. The film is an Italian-French co-production by Rodeo Drive alongside Rai Cinema and Les Films D’Ici. International distribution is in the hands of Coccinelle Film Sales.

more about: Guests in the Villa

The gathering dedicated to the mystery genre in all its guises (film, literature, TV, new media) is unspooling in virtual form on the Mymovies platform from 8 to 13 March

Review: Guests in the Villa

Ivano De Matteo’s latest film poses yet another ethical dilemma, asking where we draw the line with self-defence

The new film by the Roman director is an Italian-French co-production and is due to star Marco Giallini, Michela Cescon and Massimiliano Gallo 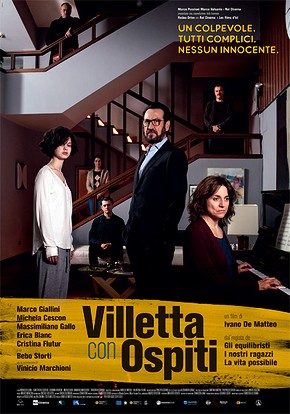 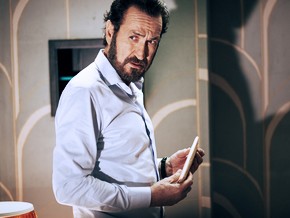 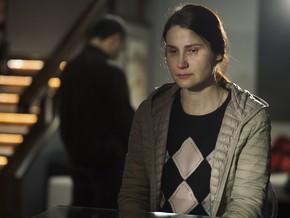