Review: Colombia in My Arms

Coming to Finland’s ongoing DocPoint 2020, following its world premiere at the Göteborg Film Festival, in the Nordic Documentary Competition, Jenni Kivistö and Jussi Rastas’ Colombia in My Arms [+see also:
trailer
film profile] shows the process of disarmament following the peace agreement signed in 2016 by the Colombian government and FARC guerrillas. It’s a process that hasn’t exactly been easy, not after over 50 years of conflict, and as immediate solutions aren’t found, the fight continues – it’s just a bit different now.

The young directors, who have both spent some time in Colombia, are clearly ambitious, marching out from the jungle right into the parliament, full of bored politicos mindlessly swiping on their phones. It doesn’t take long to understand that for all the nice declarations, self-serving deals are more important than actual peace, and the power still remains in the hands of the select few – so what else is new? But for every good scene or a rather surprising mention of both Dinner for Schmucks and Jean-Pierre Jeunet’s cracking-the-caramelised-crust delight Amélie, with one person wishing “we could be like that movie, in which many people try to do good in a million different ways”, there is something here that just doesn’t convince.

It’s not exactly easy to complain about a film after it’s announced that it has been made “in memory of those who lost their lives as a result of the armed conflict or while defending the peace in Colombia”, but it does feel much, much longer than its 90-minute running time. Not to mention messy, with the duo trying to juggle too many perspectives while sacrificing depth, despite a relatively promising start showing the conflicted feelings of the people who still lovingly clean their rifle before handing it over in exchange for political inclusion. And so, camps are packed up, fags smoked and new hairstyles chosen, but even then, there are way too many stylised images of guns, resting against the trees or next to a tube of toothpaste, oh so photogenically. As if anyone needed an additional reminder that, for all these years, they were used just as often as each other.

With people forgetting not to look at the camera and one of them clearly convinced he is playing in a gangster flick by Martin Scorsese, blurting out pretentious statements that don’t really ring true, the whole thing certainly doesn’t feel cinematic enough. Which is a shame, as Kivistö and Rastas managed to slip into some interesting places, but their film just can’t shake the feeling of a TV reportage. “The peace agreement doesn’t mean we are already in power,” goes one of the obvious statements, and while you will walk out knowing a bit more about the topic, you will struggle to feel the emotion.

Colombia in My Arms was produced by Markku Tuurna for Finland’s Filmimaa, together with Norway’s Medieoperatørene, Denmark’s Hansen & Pedersen Film og Fjernsyn and France’s Les Films d'Un Jour. It was made in collaboration with Yle, France Télévisions, DR2 and NRK.

more about: Colombia in My Arms

Based in Malmö, Sweden, the 31st edition of the festival will unspool online, with a select few in-person events

Göteborg picks Beware of Children as its winner

Review: Colombia in My Arms 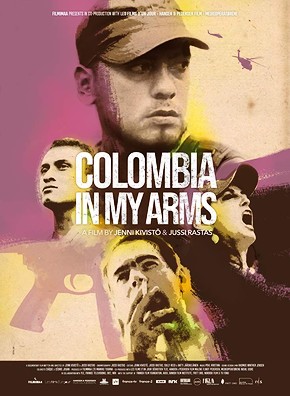