Molly Windsor in Make Up

The coming-of-age film gets a revamp in Make Up [+see also:
trailer
film profile], the feature debut by British director Claire Oakley, which played in the Bright Future section of International Film Festival Rotterdam (IFFR) this year.

Something seems to be off from the very start, when Ruth (Molly Windsor) arrives in the middle of a pitch-black night in a caravan town in Cornwall, meeting her boyfriend of three years. Besides the inherent creepiness of a deserted town during the off season, these empty and identical houses also give off a distinct sensation of apprehension. They seem to be waiting with bated breath for the tourists to come and bring them back to life. This feeling of constantly being on tenterhooks pervades the entire film as the young Ruth, despite all her efforts to appear cool and relaxed, seems anxious and impatient about something – when we first see her, she is biting her nails. But Oakley purposefully delays the revelation of what exactly is bothering the young woman, and Windsor’s naturally peaceful expression goes a long way in sustaining the suspense.

The cute, offbeat relationship between the two young lovers (Windsor has great chemistry with Joseph Quinn, who plays boyfriend Tom) grounds the film in a realism that unfortunately isn’t consistent across all of the performers, which dilutes and confuses the movie’s intentional play with degrees of unreality. After she finds long red hairs on Tom’s clothes, Ruth begins to see the elusive silhouette of a red-haired girl around the town – but the simultaneous intrusion of more fantasy-like and surreal images and sounds (red nails turning into claws, loud moans coming from the empty stall next door, strange lights shining from an empty mobile home) suggests that all of these unsettling elements might be products of the young woman’s own mind.

Ruth is clearly worried about Tom and the mysterious redhead, but as the strange manifestations of her disturbed psyche multiply, it becomes clear that this suspicion has triggered in her something deeper and more complex than simple jealousy. Her sexually charged and violent visions hint at a hidden and cavernous desire, one that very literally frightens her as it takes strange and unsettling shapes.

Though initially extremely compelling, the enigmatic first half of the film slightly outstays its welcome – yet one longs for its voluptuous and mysterious atmosphere in the film’s later part. As Ruth finally comes to take control of her latent hunger, she expresses her desire through unconvincing clichés, undoing a great deal of the film’s earlier original reworking of coming-of-age tropes. Make Up nevertheless remains an exciting and inventive debut, and Oakley is a director to keep an eye on.

Make Up was produced by the UK’s Quiddity Films and Creative England’s iFeatures.

more about: Make Up 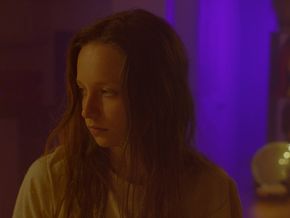