05/02/2020 - Against a backdrop of a politically divided Venezuela, Anabel Rodríguez Ríos shows two local titans making waves in the floating and forgotten village of Congo Mirador

At the heart of global displacement lie inequality and environmental disasters. Both have been endured on the shores of Lake Maracaibo. Once the gold mine of the entire Venezuelan population thanks to its massive crude-oil reserves, the region surrounding the lake is now polluted, neglected and plagued by drought. Sedimentation has altered the way of life in the lakeshore palafitos, or stilt-house villages, as the water levels have decreased. The Catatumbo River is polluted with oil, and transports dead fish, snakes and disease into floating towns like Congo Mirador. While the water is crucial to the quality of life, dredging the area around Congo Mirador or investing in its economy couldn't be further down the government's list of priorities. In Caracas, no one seems to see beyond the capital's riches and the country's feud with the United States.

With Once Upon a Time in Venezuela [+see also:
trailer
film profile], which recently premiered in the World Cinema Documentary Competition of the Sundance Film Festival, Anabel Rodríguez Ríos explores these political dynamics from a local point of view. Shot over a period of seven years, it covers a series of pivotal moments in the history of Venezuela by focusing on two local, larger-than-life matriarchs. Ms Tamara, a die-hard chavista and fiercely loyal to the party, is the local representative of the government and has been re-elected three times. Nathalie, not a member of the party, is the only teacher in the village. Within the microcosm of the town's petty, personal and partisan quarrelling, we find a reflection of the chaos in the nation as a whole. The documentary, with barely any image shot outside of Congo Mirador, is poignant and speaks volumes about Ríos' exemplary storytelling skills.

The differences between the two women are amplified by the approaching parliamentary elections. Overt bribing isn't beneath Tamara, while brief moments of resignation take hold of Nathalie. People are deserting their villages. In Congo Mirador, this means literally moving your whole house: the house structure is ripped off the bottom and transported by two boats. While this surreal image is aesthetically rewarding for a filmmaker, it is also essential to the message that Ríos conveys. From bathing and shaving to fishing for sustenance and transport to school, the river means everything to the town, and functions here as a third character that weaves everything together and dictates how the documentary flows.

With their heads above water and their hands blindly probing the bottom of the river, the young teacher and her family gather shells. These scavenged treasures are painted, customised and turned into jewellery. To compensate for the lack of food and supplies, Nathalie sells the earrings and the bracelets to collect funds for the school. The scene is exemplary of Anabel Rodríguez Ríos' style: she records fleeting moments of everyday life. While seemingly trivial, the episodes carry immense meaning and are telling of the urgent situations that rural Venezuela has to face. Like the heat lightning that the region of Lake Maracaibo is known for, Once Upon a Time in Venezuela might not be loud, but it is certainly powerful.

Upon leaving the town, one of the boats glides past a wall painted with “CHAVEZ” as if to remind us that this mess is the legacy of times past and that the authorities, on either side of the political spectrum, have one thing in common: they tend to forget these small villages. This idea of neglect is emphasised during a brief encounter with The Venezuela, an old ship stranded not too far from the village. It just sits there, rusting and stuck on top of the amassed sediment in the lake. “No one ever came for it,” says an old musician whose melancholic notes have accompanied us throughout the documentary – a fitting image for the once-prosperous, but now forgotten, Congo Mirador.

more about: Once Upon a Time in Venezuela

Against a backdrop of a politically divided Venezuela, Anabel Rodríguez Ríos shows two local titans making waves in the floating and forgotten village of Congo Mirador 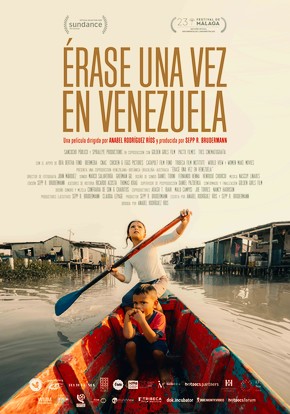 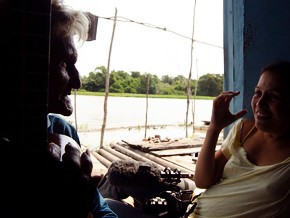 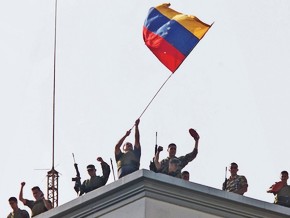