22/02/2020 - BERLINALE 2020: Carmen Losmann tries to understand the concept of economic growth and relate it to the ordinary viewer in this Forum documentary

In her second feature-length documentary, Oeconomia [+see also:
trailer
interview: Carmen Losmann
film profile], which has just world-premiered in the 70th Berlinale's Forum, German filmmaker Carmen Losmann (Work Hard - Play Hard) puts herself in the role of the layperson trying to understand the system of economic growth and where the money which generates profit in the economy as a whole is coming from. We never see her on screen, but it is her voice-over and interviews with experts, bankers, the CFOs of big companies and the European Central Bank that drive this complex, dense film in its search for explanations of this elusive concept.

Employing actors to reproduce the answers she received by email or phone for those interviewees who wanted to remain anonymous, and using simple computer graphics to directly illustrate her conclusions, but also to give the viewer some respite from the succession of difficult financial explanations and terms, Losmann embarks on a journey that starts with a simulated scene of credit approval in the Basel-based Gemeinschaftsbank. Most of the companies she went to were happy to do a simulation, but none wanted their actual decision-making process to be filmed. And for the interviews with their executives, they all asked for the questions in advance. After this, some declined to be interviewed, like Dr Jan Mrosik, CEO of Siemens Digital Factory, who seems like the very definition of "sleazy" when he is filmed giving an inspirational speech at a digital conference.

Some interviewees simply shut her down, often aggressively, but most of them, including executives from Deutsche Bank, the European Central Bank or BMW, seem genuinely confused by her simple question: where does the money that generates profit come from? If a company spends €500 making its product, and sells it for €600, where does the customer get the extra €100 in the economy as a whole, which is presented as a closed and self-sustaining circle of investment and credit?

Their answer is usually that it is too complex to explain, but an anonymous expert tells Losmann on the phone that increasing profits and economic growth requires a continuous expansion of debt, and that that is the elephant in the room that no one wants to talk about. The key player in capitalism is the debtor, who makes others’ profits and asset growth possible.

Going as far as Allianz and the PIMCO investment company, the largest active fund manager for corporate and government bonds, Losmann tackles the issue of national banks’ dependence on big market capital, which results in fewer projects like infrastructure improvement, education, social care or sustainable energy getting financed because governments have to borrow from the market, which will not see a potential profit in it.

At the beginning, a group of independent economic experts sit at a Monopoly board on the street in front of one of the many sterile, glass-and-steel financial institutions shown in the doc, and they play the role of a Greek chorus, stripping the discussion down to simpler terms. This is where, near the end of the film, environmental issues get connected to the main storyline, but this topic could form the basis of a potential sequel to the film, rather than being the crucial point of this one.

Still, Oeconomia is a thoroughly researched, engaging (if at times hard to follow) and thought-provoking documentary, edited by Losmann and Henk Drees as concisely as possible for such a dense subject matter. The detailed sound design and eerie musical score underline both the gravity of the topic and the feeling that the system is actively hiding from and lying to the regular, law-abiding, tax-paying citizen. And the citizen is definitely not paranoid: they are indeed after his (or her) money.

Oeconomia is a co-production by Cologne-based Petrolio Film with Mainz-based ZDF/3Sat.

"How is money generated? That's the main question in my film!"

BERLINALE 2020: We sat down with German director Carmen Losmann, who has presented her documentary Oeconomia in the Forum section

Daniel Hoesl and Julia Niemann's documentary contrasts the lives of the citizens of Davos with the World Economic Forum, the elite gathering that takes place in their town every year

BERLINALE 2020: Carmen Losmann tries to understand the concept of economic growth and relate it to the ordinary viewer in this Forum documentary 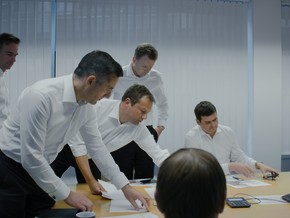 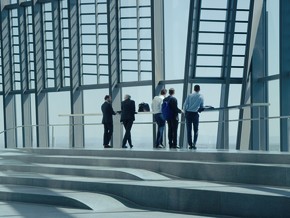