25/02/2020 - BERLINALE 2020: Teboho Edkins signs his name to an intriguing, hybrid documentary on globalisation and China’s economic presence in Africa, in a version of Lesotho reminiscent of the Far West

"I’m scared of them because they have money". We’re in northern Lesotho, amidst a breath-taking landscape of valleys and mountains, and the traditional pastoral economy of this impoverished country, surrounded on all sides by South Africa, has been turned upside down by the arrival of Chinese shopkeepers. This is the focus of Teboho Edkins’ documentary Days of Cannibalism [+see also:
trailer
interview: Teboho Edkins
film profile], unveiled in the Panorama line-up of the 70th Berlinale; a film which takes an original approach to digging down into the horrors of capitalist globalisation and the insatiable appetite for business which is destabilising social structures and ancestral mentalities.

In the area around Thaba Tseka, there’s a real western atmosphere at work: we see riders in balaclavas galloping through vast deserted spaces and herds of cows which are the backbone of everyone’s existence. It’s almost as if we’re in a Sergio Leone film, with the "sheriff-police officer" tracking down stolen animals in the night and the judge meting out sentences of staggering severity (ten years in prison for stealing 15 cows). And just like in any Far West story worth its salt, it’s the arrival of a stranger (or in this case, several strangers) which disrupts the peaceful lives of the locals. These scouts who lead the way in what might swiftly become a dominant form of economic colonisation are the Chinese; they’re at the helm of the local corner shop and small, isolated businesses, and are beginning to diversify by buying cows, with the result of a total overhaul of customs and practices: all locals must now present official documentation confirming their ownership of animals; Chinese people who keep themselves to themselves, within a micro-society withdrawing behind its own cuisine and pass-times (karaoke, billiards), and who are now planning to expand and invest in real estate (because "other Chinese people are going to come, there’s going to be more competition"). It’s a predatory presence which stirs up many questions on integration, but which also attracts others greedy parties wanting in on the action, not to mention violence …

Whilst Teboho Edkins has identified a particularly interesting socio-economic subject to explore against a visually exceptional backdrop, he doesn’t get as much out of it as he should. Using these ingredients, Days of Cannibalism does create a rather captivating mood, but the relative slow pace, the lack of major characters whose motivations are explored in depth and, above all, the injection of fiction into the documentary without actually indicating to the viewer where or to what extent it appears in the film (which inevitably raises questions over the truth of what we’re seeing and hearing) ultimately works against this movie, which seems to be trying to slot somewhat disjointed sequences together within a vast albeit fascinating concept.

Produced by France (KinoElektron), alongside South Africa (Days Zero Films) and the Netherlands (Keplerfilm), Days of Cannibalism is sold worldwide by Indie Sales.

more about: Days of Cannibalism

Boasting both Official Selection and ACID labels, Nora Martirosyan’s film spearheads a line-up that includes the new Rémi Chayé movie, plus the upcoming efforts by Bruno Dumont and Florence Miailhe

BERLINALE 2020: Teboho Edkins signs his name to an intriguing, hybrid documentary on globalisation and China’s economic presence in Africa, in a version of Lesotho reminiscent of the Far West

The 36th CineMart reveals its winners 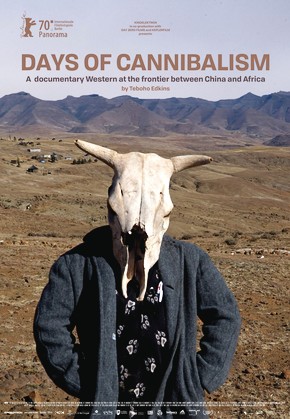