26/02/2020 - BERLINALE 2020: The South of France, off-the-cuff holidays and far-fetched romantic schemes are all in the offing for the unlikely trio leading Guillaume Brac’s fun, clever and refreshing film

"You turn up at my house, just like that, without any warning? It’s creepy. You really shouldn’t have". When you’ve travelled part-way across France with your mate to find a girl who you met a few days earlier in Paris and who you shared a night of drunken passion with in a park, only to be welcomed so coldly, it’s a blow, to say the least. But since you’re there now, on the campsite, not far from the riverbank, it would be a shame to give up so easily... Thus begins the highly entertaining and refreshing À l’abordage [+see also:
trailer
interview: Guillaume Brac
film profile] by Guillaume Brac, unveiled in the Panorama line-up of the 70th Berlinale; a film starring new faces (actors from France’s National Academy of Dramatic Arts, Le Conservatoire national supérieur d’art dramatique de Paris) and using good humour (and realism) to explore the diversity of France’s younger generation, social sticking points and fraternisation options included. And it all unfolds beneath the heat of the holiday sun, within a spacetime that’s supposed to be more laid back and open to the surprises life can bring.

From salsa dancing on the banks of the Seine to a nice time spent entangled on the grass, Félix (Éric Nantchouang) doesn’t want this to be the end for him and Alma (Asma Messaoudene), and he persuades Chérif (Salif Cissé) to go with him to the South of France, between Montélimar and Valence, where the young woman is spending her holidays. Working in order to fund their studies (one is a carer for an elderly person, the other works in a supermarket warehouse), the two friends are typical products of Paris’s inner suburbs; the type who rarely get to go on holiday. Whatsmore, they’re black. Over-excited (they’re already imagining themselves "naked in the river" and "making love like Mohicans"), they load up their camping equipment (loaned to them by an activity leader at a leisure centre) and squeeze themselves into the car of reluctant Édouard (Édouard Sulpice), a “mummy’s boy” from a good family, with a business-school look about him ("he’s got a face like an altar boy, I can’t stand it"), who was actually expecting to share his car with “Felicia” and “Cherifa”. Once at their destination, the makeshift trio get themselves settled at the campsite (Édouard has wrecked his mum’s car – whom he lied to – and must wait a week for it to be repaired), after which Félix sets about renewing contact with Alma, which proves a far from easy task, and a number of other encounters look set to take place…

A joy to partake of: this could be the strapline for a film that’s both pleasantly light and subtly intelligent without taking itself too seriously. Often sweet, sometimes slapstick and always funny, À l’abordage exploits the natural resources of its setting to perfection (taking in their dips in and canyoning excursions along the river, the campsite pool and bar, the village terraces, a cycling trip into the surrounding hills with a hilarious testosterone-fuelled battle, etc.) so as to recreate - with tasteful simplicity - the reality of French youngsters, who are rarely depicted from such a cross-cutting angle (exploring the French capital and the inner suburbs versus the provinces, different social classes, and the black-white question underlying it all); a reality which is underpinned by timeless questions on love and friendship. It’s an approach which sits at the intersection of various genres, as if a cheerful poem on real-life, which confirms the great sensitivity of Guillaume Brac, a gifted and unbiased filmmaker who knows how to turn every film opportunity (including low budget ones such as this) to his advantage, allowing him to fine-tune his skills and explore new ground.

"I need political and social issues to be smuggled in, behind a screen of lightheartedness and comedy" 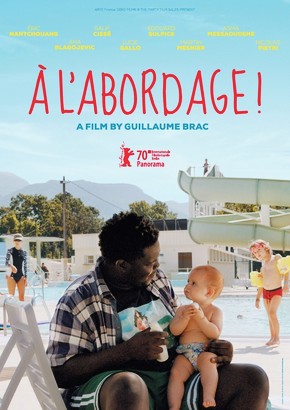