02/03/2020 - BERLINALE 2020: Un Certain Regard winner Karim Aïnouz makes an experiential documentary taking a look at a day in the life of Algerian protester Nardjes Asli

Playing in the Panorama strand of the 70th Berlin Film Festival, Karim Aïnouz’s documentary Nardjes A. [+see also:
trailer
film profile] follows 26-year-old Nardjes Asli on a protest march in Algeria on 8 March 2019, International Women's Day. Nardjes is an actress who lives in Bachdjerrah, a working-class district of Algiers, who works part-time at a café-theatre. Her father was a communist, which landed him in trouble, and this fact gives us the sense that Nardjes was born to rebel. She's a character with universal appeal, and her fashion sense would not look out of place in London or Paris. What's most enamouring are her determination, guile and drive to create a better society. It all makes her an ideal conduit through which to tell the story of Hirak (Arabic for “movement”), the Algerian protest movement born on 16 February 2019, when ageing president Abdelaziz Bouteflika decided to run for a fifth mandate, thus violating the Constitution.

Director Aïnouz's decision to concentrate on a day in the life of Nardjes, from her morning routine to dinner and dancing with friends at night, with a little protesting in between, is a smart one. It gives the audience a symbol for the future. The time constraint and the themes of life being greater than oneself also connect it with Agnès Varda's Cleo from 5 to 7.

As can be expected from a director who last year won Un Certain Regard at the Cannes Film Festival with his epic story of two Brazilian sisters, The Invisible Life of Eurídice Gusmão [+see also:
film review
trailer
interview: Karim Aïnouz
film profile], the new documentary is expertly executed from a technical perspective – and that's despite it being shot on a smartphone. A lot of effort has gone into the post-production to give the film a high production value, particularly with the sound design by Sebastian Morsch. The first moment we see the protesters, the decibel level gets ratcheted up, giving a sense of the scale and size of the movement. It then all quietens down when we see Friday prayers being performed on the street, one of the only moments when Nardjes is not centre stage on the camera. It wants to show that religion is part of society without dwelling on it. Aïnouz gives hints of the greater political story of what was happening in Algeria at the time without ever going into too much detail. There is a sense of joy at the demonstration, even when it's clear that conflict can flare up at any moment.

The shooting of the film on a smartphone was a way of getting around attempts to stop official news organisations and filmmakers from filming the protests. In the evening, the film shifts gears, first at a dinner table and then at a club. These are moments of joy and promise. The strength of the movie is its experiential quality: it makes one feel as if they are at the demonstration. Still, there is a nagging feeling throughout that the protesters are only after a structural change, calling for the legislative arm to have legitimate democratic power, but not for a new political philosophy. While Nardjes is dancing, are others plotting ways to turn this movement to their advantage? It's an excellent portrait of a character in an extreme situation, but the failure to dive deep into the politics does mean that it can feel slight, especially if you're looking for an insight into the bigger Algerian picture.

Nardjes A. is an Algerian-French-German-Brazilian co-production staged by MPM Premium, Watchmen Productions, Show Guest Entertainment and Inflamãvel, in co-production with Canal Brasil. It was developed at the Final Cut in Venice workshop, and MPM Premium is in charge of its international sales.

more about: Nardjes A.

BERLINALE 2020: Un Certain Regard winner Karim Aïnouz makes an experiential documentary taking a look at a day in the life of Algerian protester Nardjes Asli 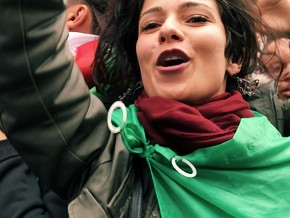 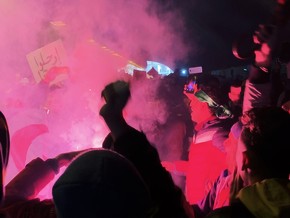 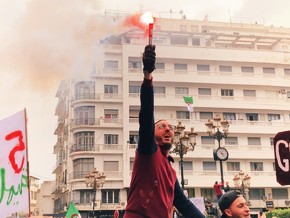