Review: Caught in the Net

Czech filmmakers Vít Klusák (The White World According to Daliborek [+see also:
film review
trailer
interview: Vít Klusák
film profile]) and Barbora Chalupová (Theory of Equality) have teamed up for a social experiment that turns into an interventionist documentary, Caught in the Net [+see also:
trailer
film profile], which world-premiered in the Czech Competition of the Prague One World International Human Rights Documentary Film Festival before the gathering was cut short due to the coronavirus outbreak.

The filmmakers set out to explore the acknowledged but underexplored world of the online sexual abuse of children. The production team built an actual film set consisting of three young teenage girls’ rooms, complete with plush toys, pink bedsheets and posters. Hiring three actresses who are over 18 but who look much younger, they created fake profiles of 12-year-old girls on Facebook and other platforms, and the friend requests from men duly came pouring in. Soon, the three actresses were video-chatting with men aged 25-50, whose faces are blurred. It is a serious experiment with strict rules of conduct, and there are a psychologist, a sexologist, a lawyer, the head of a crisis line and the head of a children's centre whom they consult with on set.

For anyone aware of such base internet behaviour, the level of depravity is hardly surprising. In most cases, sexual requests come right after the greeting, and often, the first image when the video call starts is an erect penis, pixelated for the film. However, the sheer number of men who wanted to get in touch with the three girls – more than 2,500 in only ten days – is staggering.

The premise of the feature sounds engaging, like one of the numerous Netflix true-crime documentaries, but it is only natural that it turns into a very uncomfortable watch. After the first phase, the production makes doctored nude pictures of the girls, with a model posing for the body, so that they can continue in contact after pictures have been requested. And soon enough, after an actress declines to take her clothes off in a live chat, the man threatens to share the pics online.

Although they are playing roles, the actresses are still women communicating with men, and they are thus seriously affected by the numerous difficult interactions. But just how much they are affected is revealed when they finally encounter a decent person, a young man who really only wants to talk – and just this basic normality brings the actress to tears.

A joint effort by the Czech Republic's Hypermarket Film and Slovakia's Peter Kerekes Film, with the participation of the Czech national broadcaster, Czech Television, it is clear that Caught in the Net is a big production which was able to accomplish the goal of intervening in the real world, rather than just exploring and documenting an issue. When the men suggest meeting in person, the actresses agree (in 21 of the cases), and hidden cameras and microphones, along with undercover bodyguards, are placed in a Prague patisserie. The closing credits inform us that the police have the materials and are starting official investigations.

Very early in the film, a member of the crew spots a man they know personally – someone who works with children on a daily basis. The question of whether all of these men are really that depraved is tackled early on, and a sexologist dismisses paedophilia as a misinterpretation. The scary way their faces are blurred, with only their mouths and eyes visible and the rest of the face appearing as if it had been wiped, would suggest that the filmmakers consider them monsters, but what emerges is a realisation that the seed of such instincts exists in the majority of men and that it is the social networks' and dating sites' ad-driven revenue system that enables and motivates behaviour like this to surface and develop.

more about: Caught in the Net

While the share of Czech productions among all films watched in theatres fell compared to 2020, national movies continued to hold a strong position at the local box office in 2021

The series is an original production for local VoD service VOYO, which plans to pump in more original content in a bid for new subscribers amidst the streaming wars

According to the participants, for independent distributors this pandemic was yet another test to prove their readiness in facing challenging changes

Hard-boiled crime from the Protectorate of Bohemia and Moravia, and hockey players falsely accused by the communist regime were among the 2021 winners

Agnieszka Holland’s biopic has won the Best Film Award, while the period drama flick Shadow Country was honoured with the most trophies

Before the pandemic ravaged the domestic box office, Mariana Čengel Solčanská and Rudolf Biermann’s political thriller took it by storm 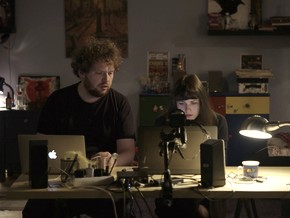 European Film Schools – 17/05/2022
Educational initiative “Exploring, Cinéma, cent ans de jeunesse!” set to become an Erasmus+ project
For over 25 years, the project has been committed to uniting children and youngsters from many different countries through their love for cinema