Review: There Will Be No More Night

20/03/2020 - Eléonore Weber signs her name to a fascinating and terrifying documentary which looks to decipher and reflect upon images filmed by helicopters on operations in Afghanistan, Iraq and Pakistan

"There’s always the risk that you’ll get something wrong, but once you’ve opened fire, it’s hard to stop"; "They feel like there’s an eye staring at them, an eye with a lid which no longer closes." When they’re in flight over conflict zones, everything helicopter pilots see is filmed and then archived. It’s exclusively by way of these images (shot by American and French troops in Afghanistan, Iraq and Pakistan) and the anonymous testimony of a pilot that director Eléonore Weber has crafted There Will Be No More Night [+see also:
trailer
film profile], a stupefying and meticulous documentary which depicts war entirely through the eye of a military viewfinder, progressively widening its scope from highly detailed technical explanations to encompass vast moral questions and societal issues.

Screened in the French competition section of the 42nd Cinéma du réel Festival (continuing online until 22 March for jurors and badgeholders), it’s a captivating film which manages, with brilliance and simplicity, to overcome the difficulties that come with relying entirely on seemingly monotonous videos (landscapes and ghostly silhouettes captured by thermal cameras), thanks to an especially well-measured and pertinent style of voice-over narration.

"There are two pilots in each helicopter. Below, there’s the one who flies the aircraft. Above, there’s the captain, the gunner. The captain wears a helmet which controls the movements of the helicopter’s camera. If he moves his head, the camera follows. These head movements also guide the autocannon". The film immerses itself into this world, which is reduced to the view of, and complex decisions made by, this man-come-scanner. It takes in everything, from these airborne troops’ training (everything which produces heat shines and shimmers to the point of disorienting them, close-ups cause nausea and the only noise which reaches the pilot’s ears is the burst of gunfire raining down from his own cannons) to their assessment of behaviour on the ground in times of war (how do you decide who’s a suspect and who isn’t when a simple rake and a Kalashnikov look so similar, when some locals run away instinctively and others because they’re hiding something, and when all the locals end up carrying weapons?).

Filming her anonymous pilot-come-witness as he attempts to decipher different situations, the director exposes us to a wide range of terrifying episodes, where surveillance, lethally accurate shots, anxiety over errors or blunders (which do inevitably happen) all intermingle. Between mountains and towns, bodies fall to the ground on-screen, wounded parties are finished off, passers-by walk along with the eye of the camera-weapon firmly fixed upon them… It’s a menacing stare, which the director then uses to show us just how effective more recent cameras are in suppressing the night: "Soon, some of us will see as if it were daytime. Others will remain in utter darkness (…), with little lamps and torches. The powerful ones will see them coming as clear as day: it will be a world of real nights and false days."

Crafted with great narrative control, and subtly intermixing the pilots’ radio exchanges with multiple aerial shots, There Will Be No More Light is a highly accomplished film and a rather remarkable mise en scène experience in terms of its visual material, which is somewhat heavy-going in terms of its length, but which is ultimately lifted by the intelligence of its narration. It’s a captivating journey, as if we were "breaking and entering, as if opening a door which should never have been opened", in a world which is already very much like our own.

Coming via the ParisDOC (Cinéma du reel Festival) and the “Films en cours” Post Production (Entrevues Belfort Festival) platforms, There Will Be No More Night is produced by Gaëlle Jones for Parisian firm Perspective Films.

more about: There Will Be No More Night

Films from France, Germany and Poland were also among the award winners at the online iteration of the Romanian gathering

Review: There Will Be No More Night

Eléonore Weber signs her name to a fascinating and terrifying documentary which looks to decipher and reflect upon images filmed by helicopters on operations in Afghanistan, Iraq and Pakistan

Belfort shines the spotlight on the fringes of the world

The 33rd Entrevues Festival, an event dedicated to young, independent and innovative film, will unspool from 17-25 November 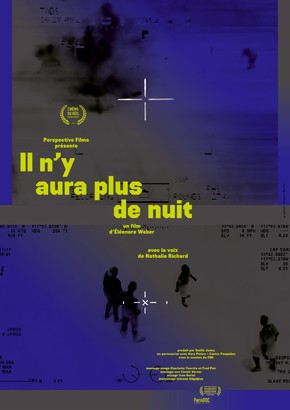 BERLINALE 2021: Shown in the Golden Bear competition, this film puts paid to Cher's claim that you can't turn back time
Maria Schrader • Director of I’m Your Man

BERLINALE 2021: Nobody's perfect? They are in this film starring Maren Eggert and Dan Stevens, but according to the German director, that's part of the problem
Alice Diop • Director of We