20/03/2020 - The director of the Oscar-nominated Corpus Christi, Jan Komasa, returns with the story of a digital-era social climber and the havoc he creates to get the girl

Maciej Musiałowski in The Hater

After enjoying a very nice 148,000-admission opening weekend in Poland on 6 March, the box-office climb of The Hater [+see also:
trailer
film profile] by Jan Komasa (Oscar-nominated for Corpus Christi [+see also:
film review
trailer
interview: Bartosz Bielenia
interview: Jan Komasa
film profile]) was brought to an abrupt halt by the coronavirus outbreak. Since 18 March, the film has been available online, so far only locally, with virtual tickets priced the same as regular cinema admissions (approximately €8), giving the producers a shot at breaking even, if not making a profit. Details of The Hater’s international premiere, which had been set for the cancelled 2020 edition of Tribeca, remain unknown.

It’s somehow ironic that Komasa’s new film can be watched, or maybe even should be watched, in what is its natural environment – the virtual world. Corpus Christi was a gospel of love in times of mistrust and voluntary social distancing, while in turn, The Hater is a thrilling tale of an anti-hero and of the survival of the fittest, which in this case means those who have a strong and agile thumb and index finger.

Tomek (a cold and chilling Maciej Musiałowski) is studying in Warsaw thanks to his rich benefactors, the Krasuckis (Danuta Stenka and Jacek Koman), whose troubled and emotionally fragile daughter Gabi (a wonderful Vanessa Alexander) has been his love interest for years. Contrary to how the world sees him, Tomek is certainly no naïve parvenu. He may be a junior in the Law faculty, which he is kicked out of for plagiarism, but he is a senior when it comes to social psychology. He excels at manipulation, both offline and online, and he knows how to talk to people and how to get where he wants. The only thing that is stopping him from getting what he really desires, which is Gabi’s love, is his social status: no matter how modern and hi-tech our world is, the social ladder still looms above us, and those who have money and power are reluctant to really invite the outsiders up it. The Krasuckis are as arrogant as they are wealthy, but Tomek is determined and patient. He gets a job at a shady PR company that discredits celebrities and politicians for money, and if the team causes havoc, or stokes the social mistrust of LGBT communities or refugees in the process – well, it’s not really their concern.

Tomek is a fast learner and an excellent inciter of online hatred, which results in both a professional and a social promotion. His new target is, ironically, the only good and honest character, a politician running for the Mayor of Warsaw’s office (Maciej Stuhr).

Observing the cynical and mindless nature of online torment is chilling and gruelling, as Komasa points to social inequality as the breeding ground for hate. Rich kids like Gabi and her friends speak English as well as their native Polish; they can pack their bags to go off to study in London or the USA with a snap of their parents’ fingers, while others like Tomek need “charity” to even get started. The gap between these two groups is an entire ocean of frustration, depression, envy, distrust and, ultimately, hate.

The Hater, which marks the second collaboration between emerging scriptwriter Mateusz Pacewicz (Corpus Christi) and Komasa, is dark and leaves us with no hope, and this tone fits in much better with the director’s taste and his pre-Corpus Christi works Warsaw 44 [+see also:
trailer
interview: Zofia Wichlacz
film profile] and Suicide Room [+see also:
trailer
interview: Jakub Gierszal - Shooting S…
interview: Jan Komasa
film profile], which The Hater is a sequel to. It is also proof that the Polish helmer’s forte is working with actors – Maciej Musiałowski embodies the menacing hater with a creepy intensity but hides all of his emotions behind his face, which feels more like a mask. When Tomek cries, you can’t be sure whether it’s out of sadness, disappointment, terror or pure anger. The psyche of this evil mastermind is impenetrable and enigmatic, probably even to Tomek himself. He is an agent of fear and chaos, and thrives in moments of social turmoil. It’s more than likely that he would revel in the COVID-19 scare, much more than anyone else. Haters gonna hate, after all.

The Hater was produced by Poland’s Naima Film, and co-produced by Polish private broadcaster TVN, Canal+ Poland, dFlights and Coloroffon. The national distributor is Kino Świat.

more about: The Hater

Mariusz Wilczyński’s animation shared the most important prizes with Jan Holoubek’s 25 Years of Innocence. The Case of Tomek Komenda, both of which are feature debuts

Tomasz Jurkiewicz in post-production with Everyone Has a Summer

The Polish writer-director’s feature debut comes on the heels of a fruitful career, during which he has helmed 15 fiction and documentary shorts

The director of the Oscar-nominated Corpus Christi, Jan Komasa, returns with the story of a digital-era social climber and the havoc he creates to get the girl

Jan Komasa returns with The Hater

The sequel to Suicide Room is said to be a mix of cyber-thriller and Shakespeare’s Romeo and Juliet, and will be released in winter 2019 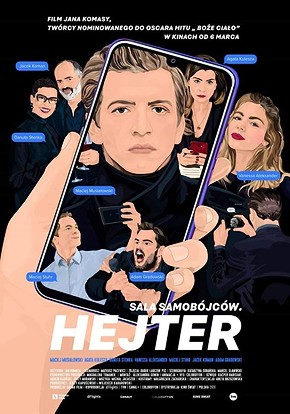