31/03/2020 - Having triumphed in the French competition of the Cinéma du réel Festival, Marie Dault’s film plunges us into a Caracas "barrio" whose inhabitants battle for survival and official existence

"I’m fighting to survive here. If it’s God’s will, the only way I’ll get out of here is feet first." Over times, precarious shacks, tangles of electric cables and destitute families have appeared on the hills of Caracas, steadily expanding the Venezuelan capital; so many informal districts unknown to the land registry and sitting outside of the law in terms of property ownership. It’s a wild urban growth inscribed within a long tradition of revolutionary struggle, to which President Hugo Chávez officially gave his blessing in 2002, encouraging the people to occupy the city’s building land and introducing administrative procedures which would help them get their hands on property deeds.

It’s within one of these districts, the Brisas de la Santa Cruz "barrio", that director Marie Dault immersed herself for Chronicle of the Stolen Land, an empathic and - from a socio-historic viewpoint - highly informative documentary which was awarded the Institut Français - Louis Marcorelles Prize for Best Film in the recent Cinéma du réel Festival’s French Competition.

"We have to carry on, we don’t have a choice. Where else would we make our homes? I live here because I’ve got nowhere else to go. We’re all in the same situation". It’s 2015, two years on from the death of Chávez, a veritable legend in Caracas’ popular districts, and the economic and political situation is tightening under the presidency of his successor Nicolás Maduro. For the one thousand or so inhabitants of the Brisas de la Santa Cruz "barrio" who were born some twelve years earlier, there’s an urgent need to make the most of the decree on the Redistribution of Urban Land ("so that landowners can’t kick us out" when the revolutionaries are no longer in power"). A series of local meetings are organised so as to put together a suitable dossier for the Institute of Urban Land (represented by the encouraging Hector), which would allow the State to subsequently act on their behalf and negotiate in court with the company officially owning the land. What they need to do, therefore, is to draw up a map of this chaotic district (with its many interconnected constructions and its rickety staircases climbing the hillside - "our barrio is the Haiti of north-west Caracas"); they need to confirm statuses, to vote in Rules for Living as a Community, and above all, to draw in a maximum of testimonials so as to provide a chronicle of this “barrio” (explaining how the inhabitants came to live there and listing everything they’ve built). It’s a painstaking job carried out by a group of women who are, themselves, spurred on by the indefatigable Keyla, a fervent supporter of the revolution. But, as the country’s economy collapses, as many flee to Colombia, Brazil or other equatorial lands and as the regime moves ever farther away from the ideals of Chavismo, they must also work hard to stay alive…

By regularly infusing her modern-day snapshot with captivating tales taken from various districts’ old chronicles, and by illustrating her work with archive footage of Caracas (a visually stunning city), Marie Dault skilfully succeeds at conveying the deeply rooted revolutionary faith which continues to animate "barrios" today. It’s a historical filter (covering Spanish colonisation in the face of the Toromaima Indians, right up to the 1989 hunger riots, via the rural exodus and industrialisation the country experienced in the wake of the mid-20th century oil boom) which expands and adds nuance to this empathic restitution (clearly marked the author’s strong ideological connection to the subject) of a microcosm, which itself finds human form in the film’s main character: an idealistic, energetic and likeable woman, who is emblematic of this people’s timeless spirit ("we’ve turned this hill into a stronghold").

Chronicle of the Stolen Land is produced by Laurent Alary for Tell Me Films and by Eric Jarno for Pays des Miroirs.

more about: Chronicle of the Stolen Land

Having triumphed in the French competition of the Cinéma du réel Festival, Marie Dault’s film plunges us into a Caracas "barrio" whose inhabitants battle for survival and official existence 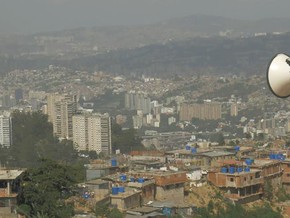