Tom Cullen is best known for his breakthrough performance as a homosexual lifeguard in Andrew Haigh's romantic drama Weekend [+see also:
trailer
film profile]. Cullen won a British Independent Film Award as Most Promising Newcomer for his turn. It's easy to be reminded of Weekend when watching Cullen's directorial debut, Pink Wall [+see also:
trailer
film profile], as both are intimate portrayals of a relationship, although recounted over very different time spans. While Weekend happens over three days, in Pink Wall, the couple, Jenna (Tatiana Maslany) and Leon (Jay Duplass), are together for many years. Pink Wall, which debuted at SXSW in 2019, is now being released on VoD in the UK.

Jenna and Leon are in frame talking to people off screen in a British pub. Leon is recounting a story about the dominant personality of his producer girlfriend, and his storytelling is raucous and passionate. Still, in concentrating on Jenna's overbearing trait, it also comes across as faint praise. A title on the screen informs us that this is Year 4 of their relationship. From off screen, an expletive is voiced in the direction of Leon, from Jenna's brother. It slices the atmosphere like an axe to a tree. Also sitting at the table is Jenna's mother, and as the tension rises, they leave Jenna and Leon to sort it out. Outside the pub, the blazing row turns into a moment of affection. It feels so real, a scene acted well, with a well-honed payoff. Unfortunately, Pink Wall doesn't reach these heights again.

The story is told in six scenes that happen over six different years, with each stage having its own visual language and dynamic, none as successful as the first. It's hard to fault such ambition, but Cullen may have been better served by sticking to one style and running with it. It's what makes a film such as Blue Valentine, which similarly jumps back and forth in time, so strong. The melancholic tone of Blue Valentine adds an extra layer to the storytelling and gives a deeper understanding of the state of mind of the characters. In contrast, in Pink Wall, the different tones seem unclear; they confuse, rather than add to the story.

The plot also has a somewhat predictable trajectory, despite the time jumps. The middle-class couple have doubts about their sexual inclinations, their friends and what constitutes a good, healthy relationship. All of these moments only serve to elucidate what was clear to us in the first scene: that this couple might not be perfect for each other. They do find solutions, even if it's to ignore the problem. However, Pink Wall never makes us fall in love with the characters. They have a prickly connection throughout, and it's unclear whether the director wants us to feel like they should stay together or fall apart.

Perhaps unsurprisingly, given Cullen's acting background, the film's ongoing strength lies in its performances. Cullen worked with Maslany in another painful relationship drama, Joey Klein's The Other Half (2016). The director and actress were also in a relationship at the time of filming Pink Wall. Make of that what you will, given how the story plays out, but what is apparent is that Maslany can inhabit the pain and confusion felt by Jenna. Duplass, famed for being part of the mumblecore movement, of which this film is a British cousin, delivers a similarly well-observed performance. His Leon is the fish out of the water, the American on the wrong side of the pond. Ultimately, it's a movie that, like many relationships, promises a great deal initially but struggles to build on that.

Pink Wall is a British production staged by Talland Films, Dignity Film Finance, and Two Flowers and a King.

Kicking off tomorrow, the Austin-based festival is welcoming several films hailing from the Continent 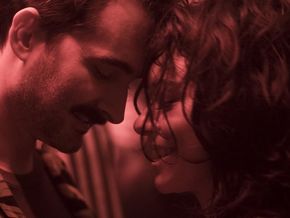