17/04/2020 - Elsa Maury’s first film immerses us in the everyday life of a farmer, determined to accompany her flock from birth until death

Nathalie, a farmer at the foot of the Cevennes mountains, learns to kill her animals. We follow the gestures of a breeder who loves and eats her sheep with care. She is perpetually at grips with the question around ways to die well, for these beasts which allow us to live. What is the taste of tenderness?

At a time when questions about modern slaughtering methods, their violence and cruelty, are multiplying, Belgian artist and researcher in visual arts Elsa Maury follows the apprenticeship of a young farmer learning to kill. Her first film, Nous la mangerons, c’est la moindre des choses [+see also:
trailer
film profile], selected in the International Mid-length & Short Films Competition of the online version of the Visions du Réel festival, opens with the cries of a distraught sheep. We follow it in a closeup and it bleats, showing us its despair. At its feet, an inert lamb. The film begins with life, and with death. The two will follow each other throughout Nathalie’s learning process, with lambings and slaughterings.

Powerful scenes revolving around the bodies of the beasts follow one another in quick succession. Births and killings of course, but also a breathtaking autopsy scene where the insides of the beast are dissected. The bright and vivid colours hypnotise, together with the soothing rhythm of the vet’s words, who in that scene is looking for the cause of death in order to prevent others. Initially repulsive, the image becomes fascinating, then almost calming, placing the body of the beast within a large continuum.

Nathalie’s mission in fact tends towards the sacred, towards the recovery of an ancestral link, a reconnection of the loose ties between species. “I would like a different death for my sheep, to make these moments more beautiful, more peaceful.” A solution imposes itself: “Kill them myself.” The idea under this method? Do things right, and follow the rhythm of the circle of life. Breed well. Kill well. Eat well.

Elsa Maury shows simply but effectively the relationship between Nathalie and her flock, one of solidarity and of healthy codependence, with the farmer essentially a part of the herd. She develops an organic rapport with her animals, as shown by her attention to the noises of the sheep, the bleating of course but also their breathing, their chewing. A rapport that is also nourished by the film’s confronting approach to bodies and flesh, from the birth to the butchering. Dialogue is reduced to a minimum. The story is almost entirely devoid of words. There are few conversations, besides those between Nathalie and the professionals who teach her about killing. Words seem limited to sequences faded to black, where in the silences are heard all of Nathalie’s questions as she puts her feelings and emotions into words. Throughout the film, her relation to the animals is transmitted in a sensorial way. There is no reasoning, analysis or arguments about the best way to kill animals here, let alone about whether they should be eaten at all. Rather, we experience. We feel. But can we eat what we love?

The film forces us to question our habits: consuming animal flesh is not a banal given. Like the farmer with her animals, the film stays close to the animals and their breeder, opening a dialogue between their bodies and ours.

more about: Considering the Ends

Elsa Maury’s first film immerses us in the everyday life of a farmer, determined to accompany her flock from birth until death 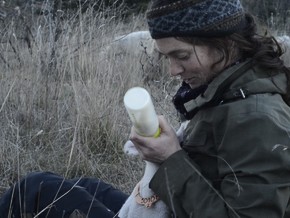 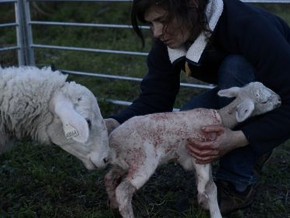 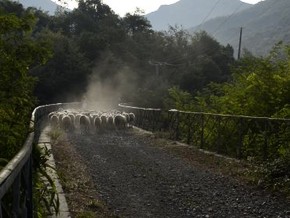